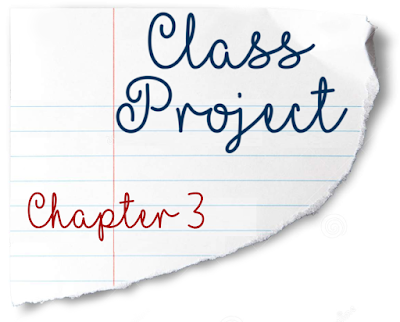 As soon as Paige had gotten her vial, she started looking for Peter. He had to be somewhere close and she wanted to talk to him before their parents showed up. It took her a while but she eventually spotted him. He was one of those who had walnut-shaded skin and black hair though with no particular ethnic emphasis. Paige thought it made him cute, about as cute as Peter said she was.


“Hey Peter, you got time to talk?” asked Paige.

“Yeah, just a sec,” said Peter before excusing himself from his group of friends. He and Paige walked over to an emptier hallway before he asked quietly, “What do you want to talk about?”

“Just the biggest topic of the day,” said Paige as she held up her vial of Double-Up.

“Yeah, can’t wait to try this stuff myself,” said Peter as he held up his vial.

“What I’d really like is to watch you change,” said Paige.

Peter grinned widely and said, “Watching you change would be awesome. But I don’t think our parents would want us to be together like that.”

“Yeah, but I don’t think they trust me to be alone with you very long,” said Peter, “They’ll probably trust us less after we’ve grown up.”

“Adults have just as any rights to be with other people,” said Paige, “Anyways, I thought of how we could watch each other’s changes.”

“If you could get past our parents,” said Peter skeptically.

“Of course we can,” said Paige, “They can’t blockade the internet.”

“I’m guessing you’ve got a better idea than to just post our changes on the web,” said Peter.

“Duh, we’ve got webcams, we can just email our footage to each other,” said Paige.

“Why not just do it over livechat?” asked Peter.

“I think we would be too distracted with each other,” said Paige, “Just wait until 8 before drinking that stuff and make sure you have your webcam going. We’ll meet up tomorrow for a real date.”

“You think our parents would let us go?” asked Peter.

“I’m sure we’ll find a way,” said Paige, “I’ll see you tomorrow.” She kissed Peter on the cheek before heading for the front doors.

“Can’t wait,” said Peter before he started heading out. 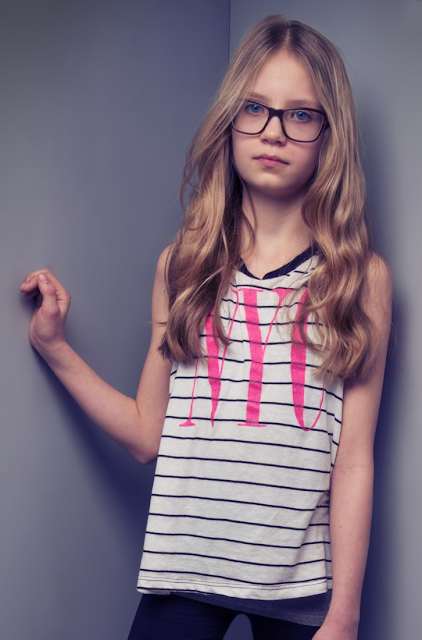 The hardest part of Paige’s little scheme was putting off taking the serum without her parents getting suspicious. The best way she figured to do so was act as if she was losing nerve. She started expressing concern if the serum would work or if she’d grow up looking pretty or not as well as what she’ll be able to do with herself as an adult for a whole week. She didn’t get too carried away with it so that her parents would second-guess about going along with the project or potentially talking herself out of it.

Fortunately, Paige’s parents were being as supportive as they could. They encouraged her to try this sneak preview of adulthood and learn all she could from it. Paige was starting to feel a bit guilty about having to break a few promises, but it would still be worth it, right?

When it was almost 8, Paige changed into one of her mom’s nighties. It was white, and it draped all the way down to her ankles and it barely bulged over the small bumps on her chest. But if she grew up the way she hoped she did, she guessed her nightie would make her look a lot sexier.

She set up the webcam of her computer and started up a recording file. She stood far enough away from the computer so that the camera could capture much of her body and have plenty of room above her to film her growth. “Hi, I’m Paige, I’m 12 years old, and I’m going to use Double-Up to become a grown-up,” she said to the camera. With that, she drank up all the serum in the vial, even if it was kinda sour.

It didn’t take long for her to start feeling the effects of the serum. She felt tingly all over her body, especially at her nipples. “Ooh, I’m starting to grow up,” said Paige, already noticing her voice was sounding different. She looked at the camera image to see that her nightie was being pulled higher up her legs as her body was lengthening. Her face was also changing, becoming less round and more angular.

Then her attention centered on her breasts which were pushing further out. She put her hands over them to feel them growing. Of course, since her hands were still growing, it caused them to inadvertently rub against her burgeoning flesh. “Oh, that feels so good,” she moaned, her voice deeper than before. She started actively rubbing her breasts, feeling them get rounder and bigger, her nipples so big and stiff.

Paige could have easily spent her entire growth just rubbing at her breasts, but she let her hands wander over her developing body. She slid them down her waist, noticing how slim and shapely it was, especially when she got to her hips. Her hips were spreading out quite nicely and her little girl’s butt had grown into a full woman’s ass. 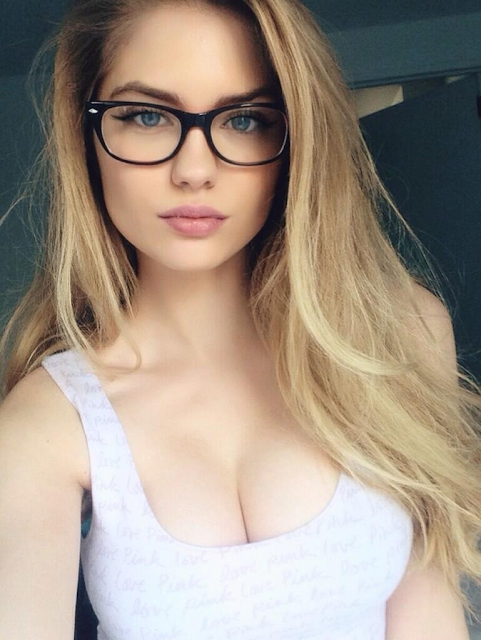 Eventually, she felt the full-body tingle stop. Well, mostly stop, she was still tingling in a few places but she was sure it was because of where her hands had been. She looked at the camera image and gave a happy gasp. The woman that was on the screen was beautiful, the classic blonde bombshell. The nightie allowed plenty of cleavage to be seen and it draped well against her hips. Her curves weren’t heavily exaggerated, but they were plenty sexy. She had to guess her breasts were large C-cups and her rear was just round enough to match.

The glasses she wore didn’t quite fit her face right, though that was probably from her growing. She should probably get some more stylish glasses to match her head, or see if she could get some contacts. For now, she simply took them off. 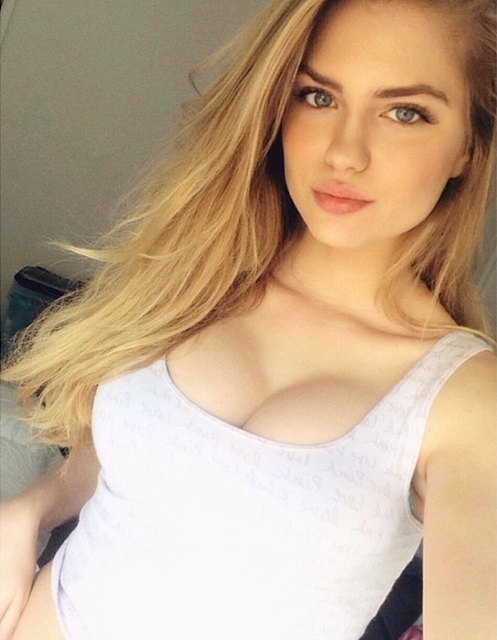 Paige walked over to the camera and bent down so her adult face took up most of the top of the screen
while allowing a good look down her nightie. “Hi, I’m Paige, I’m 24 years old, and I’m all grown-up,” she
said in her sultry new voice before clicking the end button.  She’ll definitely be keeping that video file for her to watch later, but she was gonna email a copy to Peter right now. Along with attaching the file, she typed a message on the email: ‘Here’s my growing-up vid, hope to be seeing you tomorrow. Call me when and where you wanna meet.’ After that, she sent the email.

Paige would have just waited for Peter’s email to arrive, but she had to go to her parents to let them see how she turned out. She thought she should make herself more presentable for the occasion, so she threw in some denim pants, which fitted fine, but maybe showed too much of her ankles. She also chose a skimpy, yet elegant, blue knit blouse, which was just tied on her back an neck by a thin string. She felt a bit self conscious about displaying so much skin in front of her parents, but she knew they wanted to see exactly how she looked now, and this allowed them a good glimpse. She brushed her hair a bit and went out to let them see her. 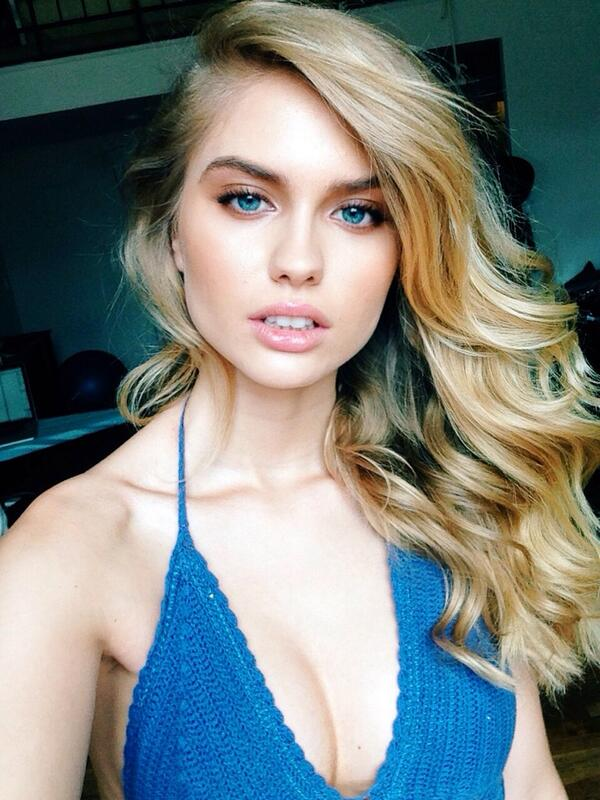 Naturally, they gushed over how pretty she was now. They probably would have kept up for hours talking about all the stuff she could do as an adult, but Paige eventually managed to excuse herself by saying she was tired and just wanted to take in her new body.

Once Paige had gotten back to her room, she quickly checked for any new emails. She found a reply from Peter and clicked on it. She read the message attached to it first: Hey Paige, can’t wait to see you tomorrow. Call me in the morning. After that, she clicked on the video file that Peter had sent.

The video started with an image of Peter standing in front of the computer, bare-chested and wearing a pair of tied-up gym shorts that probably belonged to his dad. “Hi, I’m Peter and this video is for my girlfriend Paige,” said Peter before drinking from the Double-Up vial. Paige watched excitedly for the changes to start.

It started off more subtly than Paige would have expected. Peter’s lengthening of limbs and torso were so unapparent that Paige didn’t really notice until he had gotten four inches taller. But soon she started noticing more changes, Peter’s shoulders getting wider and his chest starting to expand out. Then Peter started gaining height at a faster rate as his muscles started becoming more defined. She watched his chest rise and fall with his breath, seemingly surging out with each breath in. Soon, he had a solid set of pecs and his stomach rippled before abs became visible.

Peter’s face was getting squarer as he got older, his jaw and chin become chiseled. His throat was getting thicker and Paige thought she could make out his Adam’s apple forming. He reached down to untie the strings of his gyms shorts which were probably getting a little tight by now. He let out a sigh of relief at that, his voice sounding a lot deeper than before. His shorts barely moved down as his growth was taking up the slack. Paige was able to see more of his legs as his shorts moved up, which were thickening with muscle. 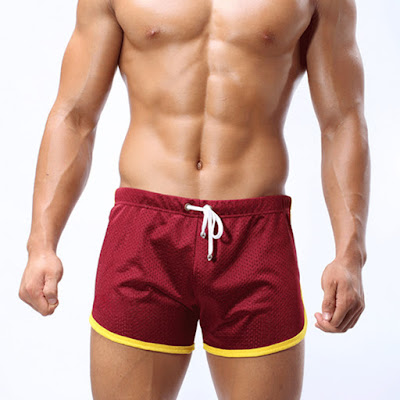 While Peter’s height was slowing to a stop, his body was still filling out. What started out as simply muscular definition was becoming chiseled artwork. Peter’s muscles became larger until he was built like a football player. Just when it seemed to be over, curly black hair started sprouting in patches on his chest, arms, and legs. He wasn’t excessively hairy, but he was definitely virile. Despite this, no stubble appeared on his face.

When Peter was done, he looked over himself. He flexed the muscles of his upper body, apparently looking very pleased with himself. Paige was pretty pleased by what she saw too. Peter had definitely grown up to be a handsome man and she couldn’t help but try to look at the front of his gym shorts. She was pretty sure she saw a bulge, but she couldn’t tell how big it was.

Then Peter leaned over to the screen and said in a deep man’s voice, “Hey Paige, I hoped you liked the gun show. I’ll see you tomorrow.” With that, the video ended. Paige was touched that Peter actually put a message in his video for her. It made her feel a little guilty for being nonspecific with what she said in her video. But she’ll have a lot more to say to Peter when they met up tomorrow. 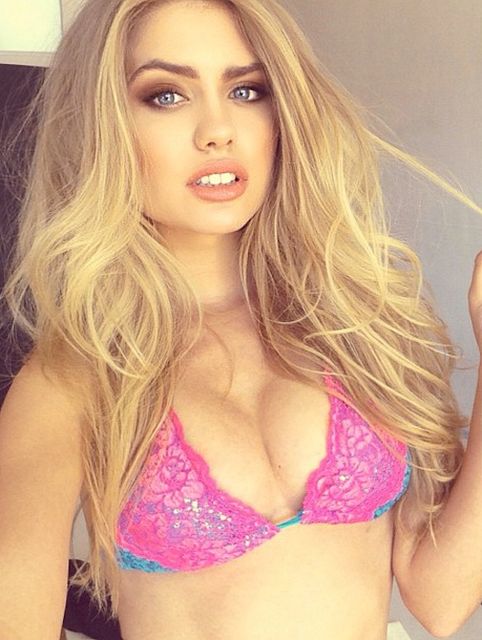 In the meantime, Paige was eager to see more of her body. She took out her clothes, and stood there in only her pink lacy underwear. One of the pamphlets she explained about the changes their bodies went through in puberty. She was very interested in reading it all.