Yes, this is the final story I’ll post on this blog.

I’ve been trying to leave for ages now. I was supposed to do it in January, and I didn’t. I’ve waited too long, because deep down I’m not ready to give it up. I like writing. But I can’t keep doing it.

The main reasons are simple and well-known to those who’ve been following the blog for a while. I don't have much time to write. But besides that, I feel a bit neglected in comparison to other authors. This blog is barely alive. I feel a bit like the awkward underdog of this community. I even notice it sometimes when I talk with a few fellow authors, as if I were only a bothersome wannabe. And maybe they’re right.

I know my writing skills aren’t the best, I really do. I keep acknowledging it over and over again. But despite that, there’s something I’ve recently realized: I’m probably the one who has produced the most AP content in the entire internet, and if not, I’m pretty close. Yet I don’t feel like I’ve accomplished anything by it. This blog is over five years old, but still irrelevant. I’ve tried everything to make readers more invested, but everything has failed, and each try leaves me more disenchanted than the last.

On the other hand, I want to thank all the faithful readers who kept making the experience gratifying. Just to alphabetically name a few (Agestories, andrea casanova, Andrew L, Angelo, Apfun, bela04, Beta A, Blake2903, BLZBub, cal narri, chillitan, Daskomet, eggplant, Growthformulamaster, Jacob, jojo93able, Joshua Fagan, Jshetz, Karo L, LM117, m.s, Merlin, Munza Zerserraf, Nick, P. Bearn, ryan penny, Serillion, The AP Master, The Mathemagician, Wakkawakka, Wiz and many others I've probably forgotten). Thank you all, particularly those who commented (even if they were Anonymus) and the ones who contributed to the blog in one way or another.

Seriously, guys, you were the best, and I wish I could stay here for your sake. Thanks.

I should be clear about something, though. Since I still enjoy writing, I could draft a story from time to time. But I can’t maintain this blog on a regular basis, so I will post it elsewhere. At the moment, Bela04’s AgeArts looks like the best place. Unlike this blog, it has a strong readership, so I think that’s where I’ll publish my material from now on. At the moment, though, I’ll keep answering the comments you leave me here.


If you're not familiar with AgeArts, I'll leave you with a link. You'll find my material there from time to time: http://www.agearts.com/

So, here’s my final caption. Since the very first one was about Little Red Riding Hood, I figured the last one ought to be about another fairytale (even if this one is technically a novel). I’ve wanted to do an Alice in Wonderland caption for ages, so this is a great time. 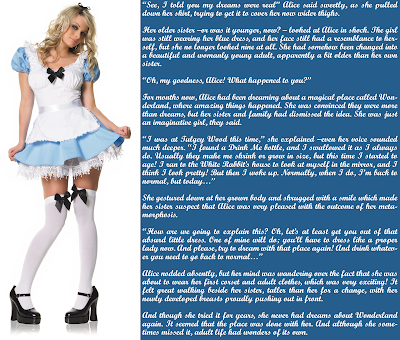