THE REVERSION - PART I (Chapter 1) 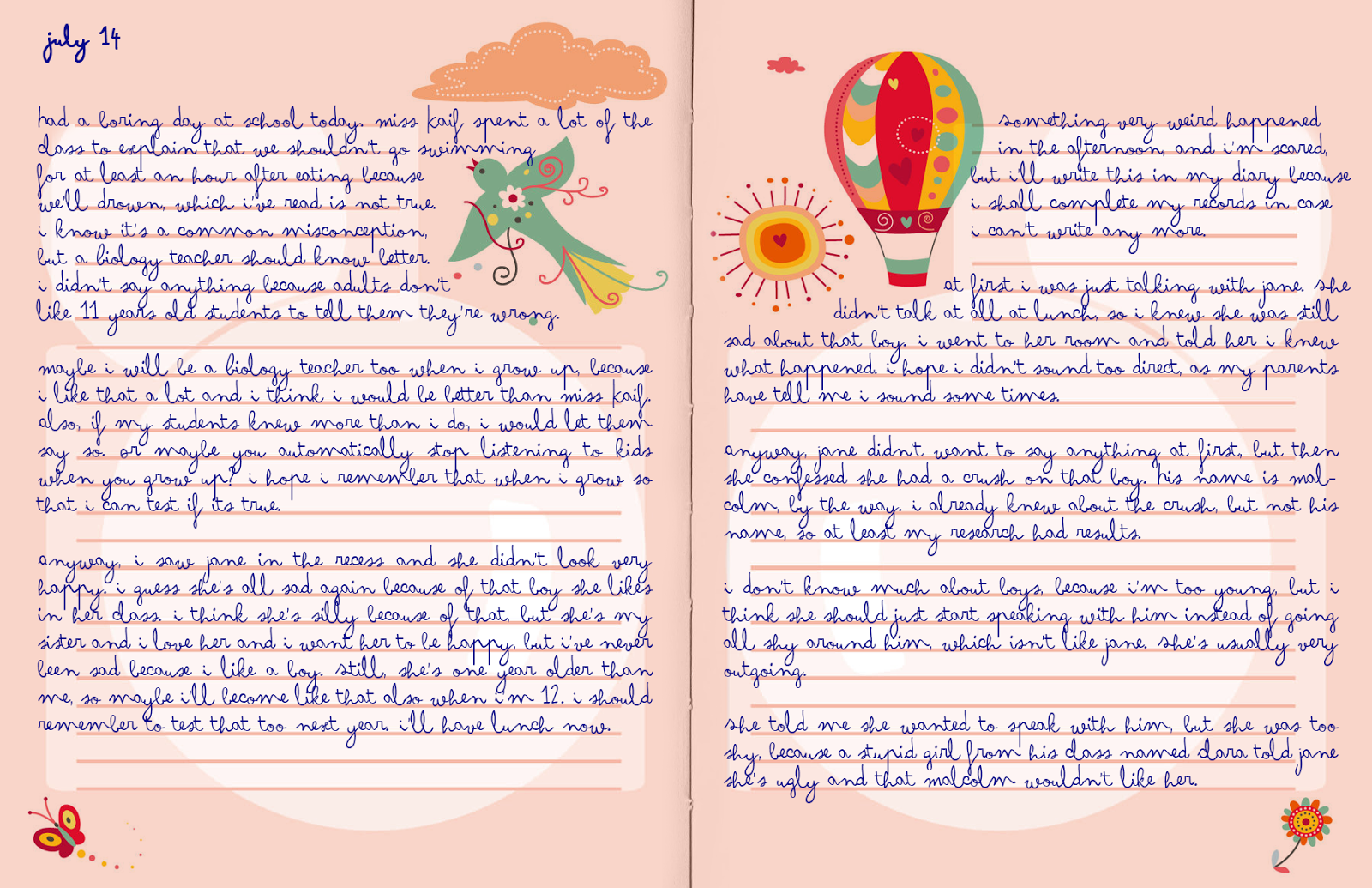 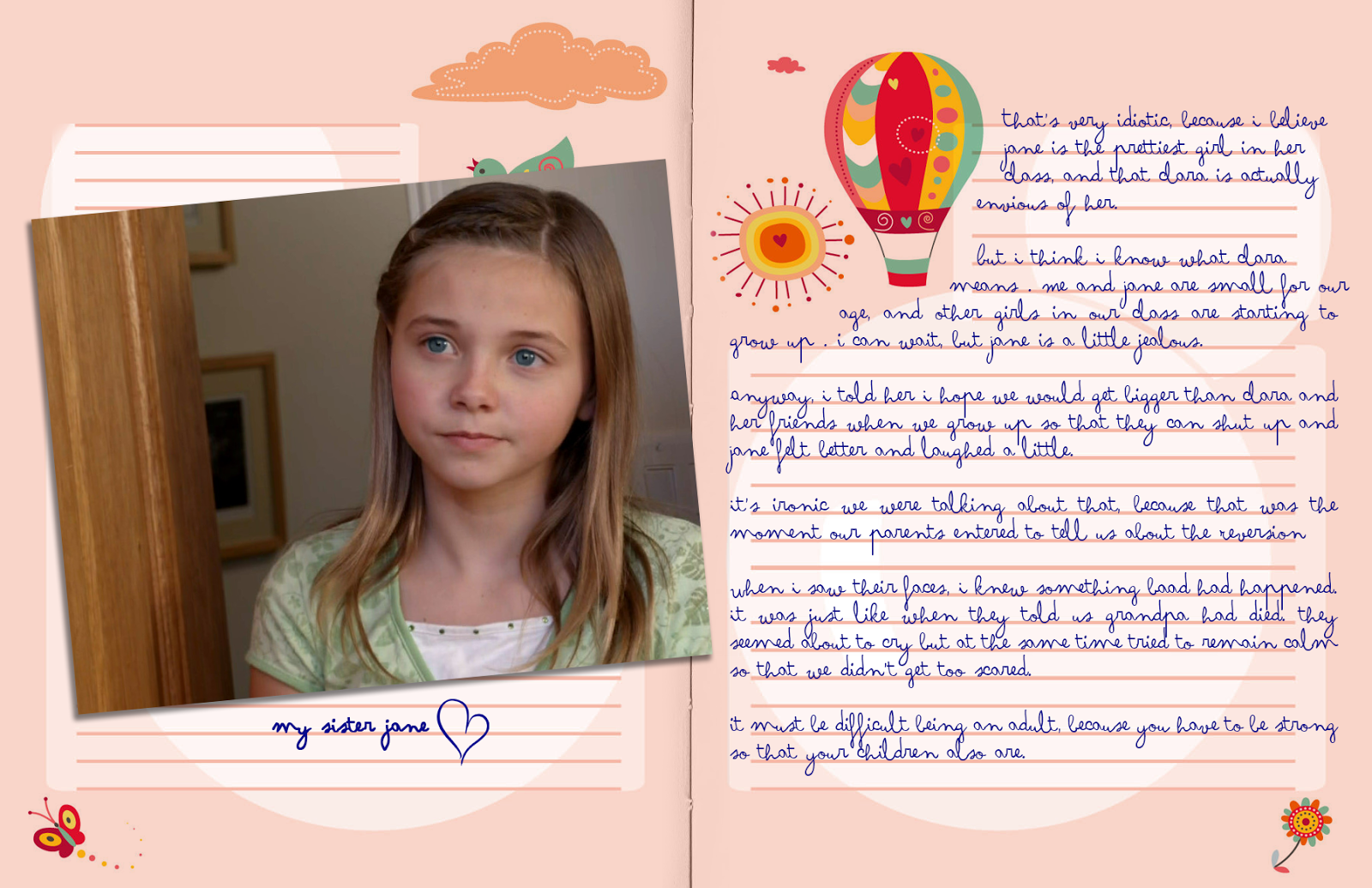 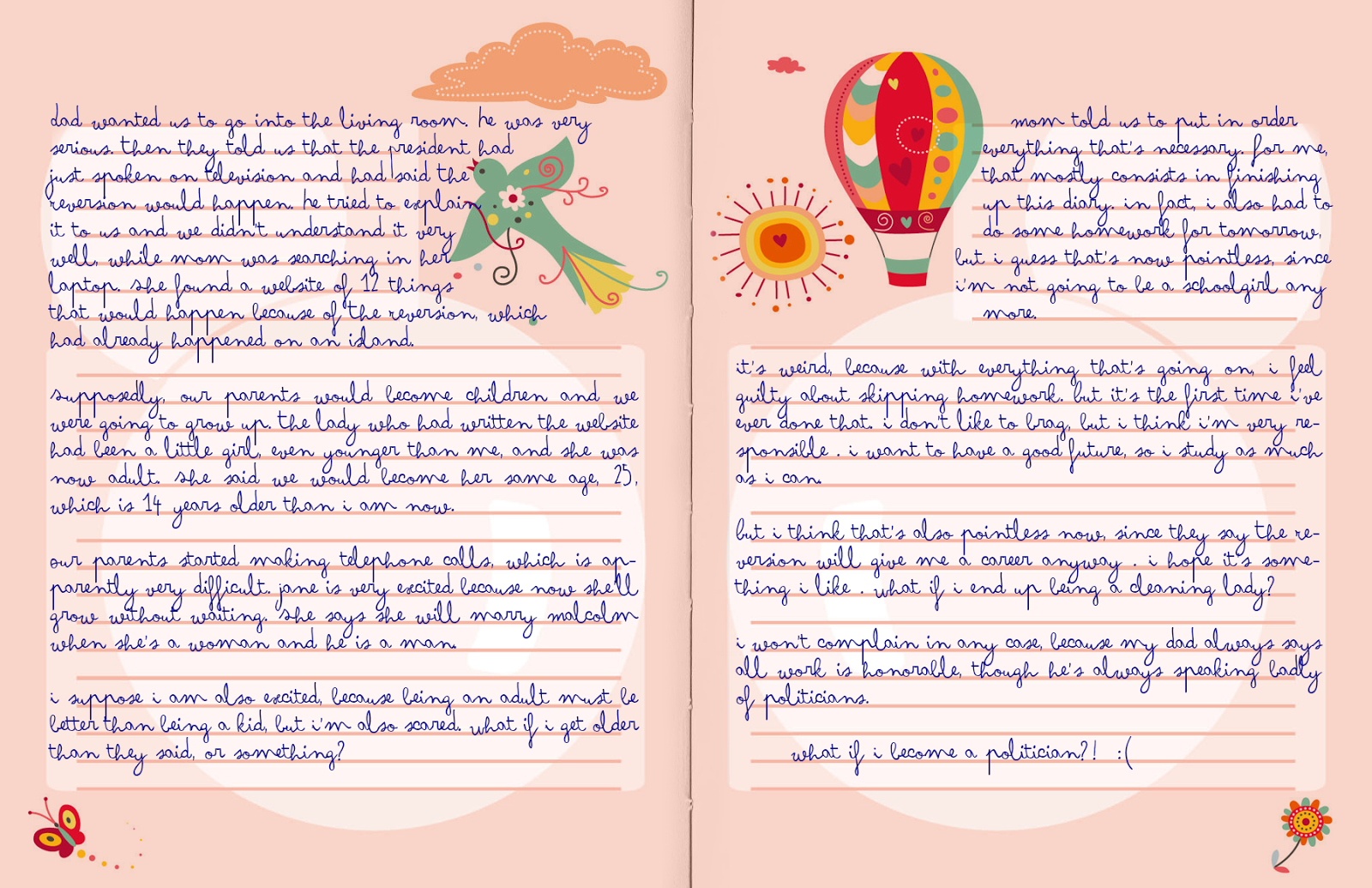 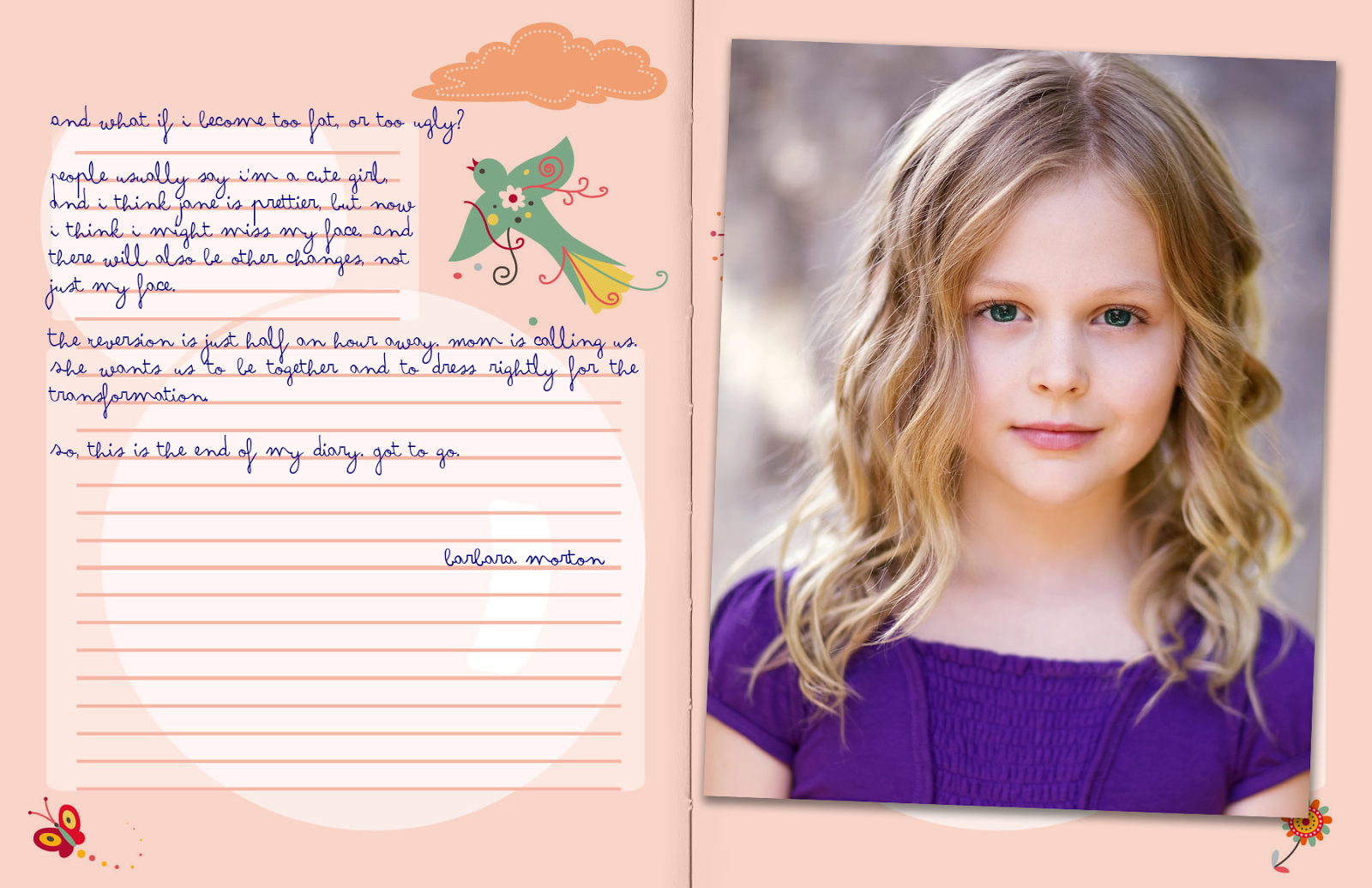 PS: Again, I'll remind you that I put a lot of effort on these so that I can build a more complete universe. I know it might be a little harder to read than usual, with the handwritting and stuff, but that's the idea, and I would recommend you to try and do it in its original form.

I'm putting the text version here anyway, but it's mainly for translator purposes:

Had a boring day at school today. Miss Kaif spent a lot of the class to explain that we shouldn’t go swimming for at least an hour after eating because we’ll drown, which I’ve read is not true. I know it’s a common misconception, but a Biology teacher should know better. I didn’t say anything because adults don’t like 11 years old students to tell them they’re wrong.

Maybe I will be a Biology teacher too when I grow up, because I like that a lot and I think I would be better than Miss Kaif. Also, if my students knew more than I do, I would let them say so. Or maybe you automatically stop listening to kids when you grow up? I hope I remember that when I grow so that I can test if its true.

Anyway, I saw Jane in the recess and she didn’t look very happy. I guess she’s all sad again because of that boy she likes in her class. I think she’s silly because of that, but she’s my sister and I love her and I want her to be happy, but I’ve never been sad because I like a boy. Still, she’s one year older than me, so maybe I’ll become like that also when I’m 12. I should remember to test that too next year. I’ll have lunch now.

Something very weird happened in the afternoon, and I’m scared, but I’ll write this in my diary because I shall complete my records in case I can’t write any more.

At first I was just talking with Jane. She didn’t talk at all at lunch, so I knew she was still sad about that boy. I went to her room and told her I knew what happened. I hope I didn’t sound too direct, as my parents have tell me I sound some times.

Anyway, Jane didn’t want to say anything at first, but then she confessed she had a crush on that boy. His name is Malcolm, by the way. I already knew about the crush, but not his name, so at least my research had results.

I don’t know much about boys, because I’m too young, but I think she should just start speaking with him instead of going all shy around him, which isn’t like Jane. She’s usually very outgoing.

She told me she wanted to speak with him, but she was too shy, because a stupid girl from his class named Clara told Jane she’s ugly and that Malcolm wouldn’t like her.

That’s very idiotic, because I believe Jane is the prettiest girl in her class, and that Clara is actually envious of her.

But I think I know what Clara means. Me and Jane are small for our age, and other girls in our class are starting to grow up. I can wait, but Jane is a little jealous.

Anyway, I told her I hope we would get bigger than Clara and her friends when we grow up so that they can shut up and Jane felt better and laughed a little.

It’s ironic we were talking about that, because that was the moment our parents entered to tell us about The Reversion

When I saw their faces, I knew something bad had happened. It was just like when they told us grandpa had died. They seemed about to cry but at the same time tried to remain calm so that we didn’t get too scared.

It must be difficult being an adult, because you have to be strong so that your children also are.

Dad wanted us to go into the living room. He was very serious. Then they told us that the President had just spoken on television and had said The Reversion would happen. He tried to explain it to us and we didn’t understand it very well, while mom was searching in her laptop. She found a website of 12 things that would happen because of The Reversion, which had already happened on an island.

Supposedly, our parents would become children and we were going to grow up. The lady who had written the website had been a little girl, even younger than me, and she was now adult. She said we would become her same age, 25, which is 14 years older than I am now.

Our parents started making telephone calls, which is apparently very difficult. Jane is very excited because now she’ll grow without waiting. She says she will marry Malcolm when she’s a woman and he is a man.

I suppose I am also excited, because being an adult must be better than being a kid, but I’m also scared. What if I get older than they said or something?

Mom told us to put in order everything that’s necessary. For me, that mostly consists in finishing up this diary. In fact, I also had to do some homework for tomorrow, but I guess that’s now pointless, since I’m not going to be a schoolgirl any more.

It’s weird, because with everything that’s going on, I feel guilty about skipping homework. But it’s the first time I’ve ever done it. I don’t like to brag, but I think I’m very responsible. I want to have a good future, so I study as much as I can.

But I think that’s also pointless now, since they say The Reversion will give me a career anyway. I hope it’s something I like. What if I end up being a cleaning lady?

I won’t complain in any case, because my dad always says all work is honorable, though he’s always speaking badly of politicians.

What if I become a politician?! :(

And what if I become too fat, or too ugly?

People usually say I’m a cute girl, and I think Jane is prettier, but now I think I might miss my face. And there will also be other changes, not just my face.

The Reversion is just half an hour away. Mom is calling us. She wants us to be together and to dress rightly for the transformation.