THE REVERSION - PART I (Chapter 5)


A short but important entry. 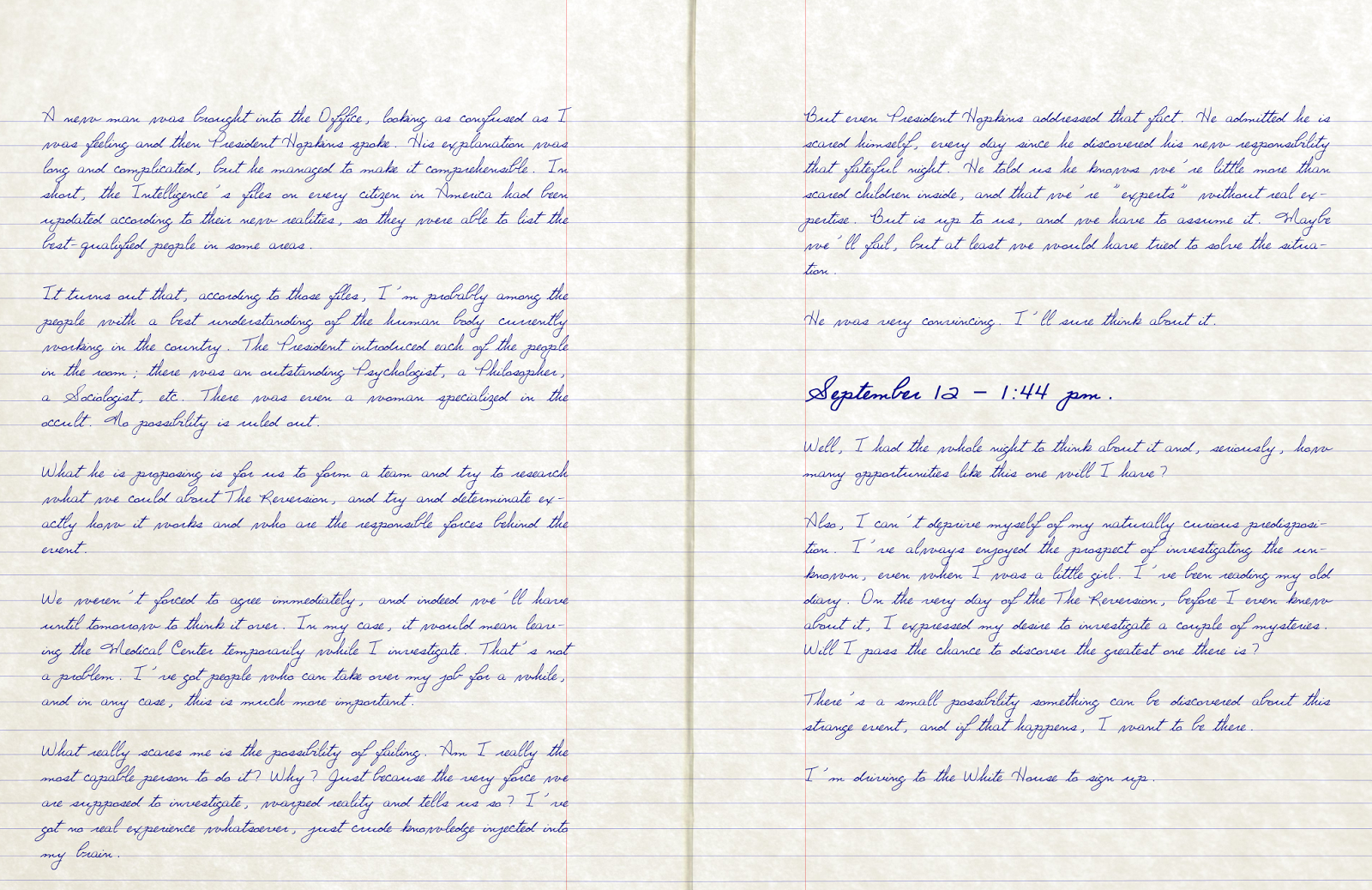 Yes, I’ve find myself unable to stop this account for yet a second time. I thought the filling of my old diary was enough, but something has happened which makes this necessary. It’s now an official matter, after all, so I’ve started to use this simple notebook I found on a drawer. It’s also kind of comfortable getting rid of the other one, so small and childish.

Very early this morning, while I was getting ready for work when someone ringed the doorbell. I opened I found two huge twins wearing dark suits and sunglasses. I’ve seen my share of big men after all most of the new male adults are very athletic, but these two are by far the largest I’ve seen.

They must have noticed my somewhat frightened expression, because they asked if I was all right. I had to admit I was impressed by their size, and they both laughed and told me they were still impressed themselves. It seems they were only 5 years old before The Reversion, and are now transformed into these towers of muscle.

I have to admit that they have sweet manners, so I was softened, despite they intimidating appearances. But when they told me they’re from the President’s Secret Service, I was obviously frightened all over again.

They told me I could take my time and dress as formally as I could, since they were taking me to meet the President.

I didn’t understand what this was all about, but I wasn’t about to sy no to those men. Hastily but carefully, I put on a skirt suit I hadn’t used yet.

Once I was ready, they took me outside my house and into a black car. We drove for a while and then they left me into another car driven by yet another agent, who got off and opened the door for me. This one’s appearance and behavior was less formal than the twins’, and he was way smaller than them; in my high-heeled shoes, I had a few inches over him. The twins didn’t left, though. They car escorted ours for the rest of the way.

This second car actually drove me inside the White House. A part of me still feared this was a rouse to kidnap me for some reason or another.

They made me pass through a metal detector and searched inside my rather large purse. Then I was left for about a minute to wait outside a very recognizable door before taking me inside. I actually stood inside the Oval Office!

Besides three more agents standing quietly against the walls, there were eight people sitting there, but I only recognized two of them. One, obviously, was Shane Hopkins, the new President himself. He was a short and gentle-looking man. When I entered and was introduced by one of the twins, he stood up and shook my hand, smiling frankly. He was really nice.

He told me to sit and I did so next to the other person I could recognize: she was none other than Lena Underwood, the reporter who had witnessed the first attack and, arguably, the greatest celebrity of this post-Reversion world. She was as pretty as she looked in her photographs, and she also struck me as a very sympathetic person.

A new man was brought into the Office, looking as confused as I was feeling and then President Hopkins spoke. His explanation was long and complicated, but he managed to make it comprehensible. In short, the Intelligence’s files on every citizen in America had been updated according to their new realities, so they were able to list the best-qualified people in some areas.

It turns out that, according to those files, I’m probably among the people with a best understanding of the human body currently working in the country. The President introduced each of the people in the room; there was an outstanding Psychologist, a Philosopher, a Sociologist, etc. There was even a woman specialized in the occult. No possibility is ruled out.

What he is proposing is for us to form a team and try to research what we could about The Reversion, and try and determinate exactly how it works and who are the responsible forces behind the event.

We weren’t forced to agree immediately, and indeed we’ll have until tomorrow to think it over. In my case, it would mean leaving the Medical Center temporarily while I investigate. That’s not a problem. I’ve got people who can take over my job for a while, and in any case, this is much more important.

What really scares me is the possibility of failing. Am I really the most capable person to do it? Why? Just because the very force we are supposed to investigate, warped reality and tells us so? I’ve got no real experience whatsoever, just crude knowledge injected into my brain.

But even President Hopkins addressed that fact. He admitted he is scared himself, every day since he discovered his new responsibility that fateful night. He told us he knows we’re little more than scared children inside, and that we’re “experts” without real expertise. But is up to us, and we have to assume it. Maybe we’ll fail, but at least we would have tried to solve the situation.

He was very convincing. I’ll sure think about it.

Well, I had the whole night to think about it and, seriously, how many opportunities like this one will I have?

Also, I can’t deprive myself of my naturally curious predisposition. I’ve always enjoyed the prospect of investigating the unknown, even when I was a little girl. I’ve been reading my old diary. On the very day of the The Reversion, before I even knew about it, I expressed my desire to investigate a couple of mysteries. Will I pass the chance to discover the greatest one there is?

There’s a small possibility something can be discovered about this strange event, and if that happens, I want to be there.

I’m driving to the White House to sign up.
Posted by The Planet of the AP at 12:25 AM