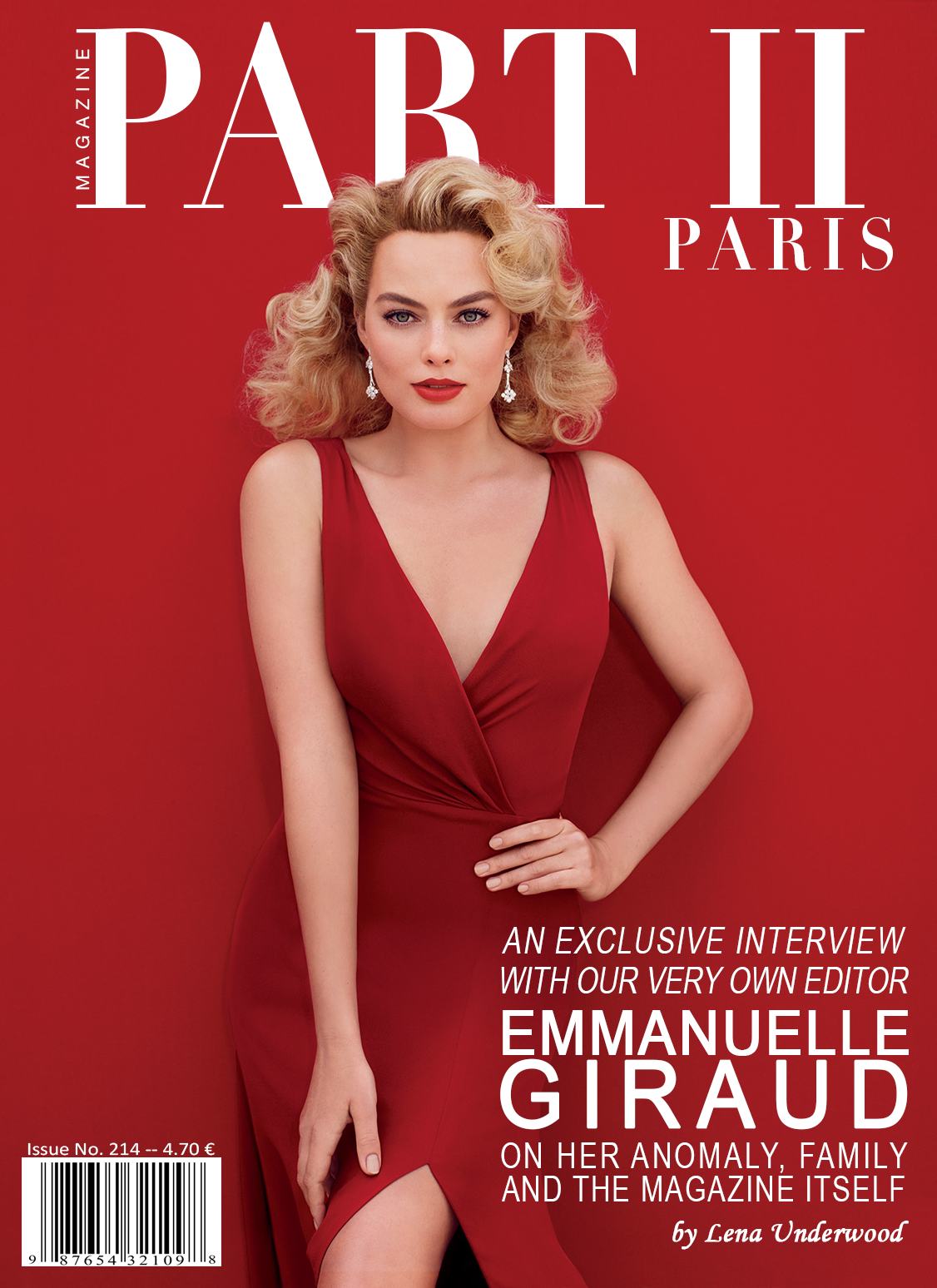 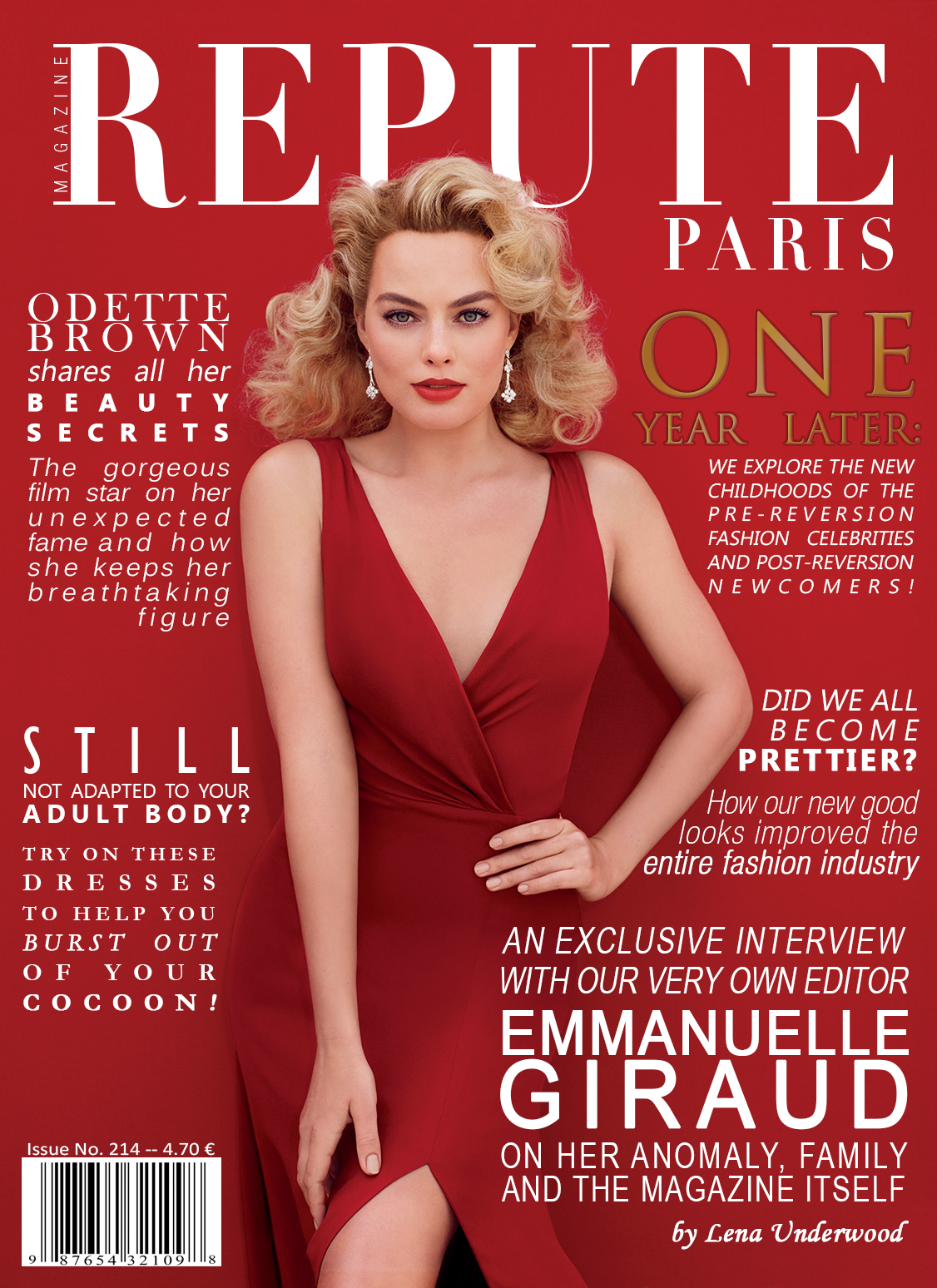 BEHIND THE GLAMOUR:
EXCLUSIVE INTERVIEW WITH THE EDITOR
OF OUR MAGAZINE, EMMANUELLE GIRAUD

It’s not every day that a world famous editor contact another to say she’s finally ready to open up about her personal life, that she will only speak to that other editor, and that she would publish the resulting interview on her own internationally-renowned magazine.

That is, of course, what happened to me last month when I received an unexpected call from the offices of the Reputé Magazine in Paris. The pleasant caller told me I would be put shortly in contact with their editor, Emmanuelle Giraud herself.

I won’t pretend I am a particularly knowledgeable person in the world of fashion, as doubtlessly readers of this magazine would call my bluff, but in the year since The Reversion hit, who hasn’t heard about Emmanuelle Giraud? Her rise as the most influential fashion editor is comparable with the likes of her pre-Reversion colleague Anna Wintour. I’m just a regular newspaper editor, whose only honest claim to fame is to have been the only available reporter when a world-changing event took place. A struck of luck.

I was still surprised at this unexpected honor when Madame Giraud took over the line. Her warm greeting immediately revealed what a down-to-Earth person she was. After that, she simply said “I’m prepared now.” That was, I immediately understood, a long-delayed answer to the only other communication I had with her.

Some might remember my many reports from last October and November, during which I documented the discoveries of the scientific commission lead by Barbara Morton to try to understand The Reversion. We received numerous reports of particular happenings, some of which were dubbed as “Anomalies” by Doctor Morton’s team. One of said cases concerned Emmanuelle Giraud, but her name wasn’t still as celebrated as it is today. I sent a formal request to interview her, but I hadn’t received an answer until that day, almost a year later.

I arrived in France on the prearranged day and I was driven to the Girauds’ vineyard, in the outskirts of Paris. I immediately realized it was the best of places for a well-to-do Parisian family to live: it was close enough to the city, yet just outside it. Emmanuelle could go from there to her office and back in a very short time.

Once inside the house, I was directly received by Madam Giraud herself. She kissed me twice on each cheek: her greeting was as warm as it had been on her phone call, and she was as beautiful and smartly dressed as in her pictures. She has a lovely accent, but her English is quite good.

“No, I didn’t speak English before The Reversion.” she answered when I questioned her. “That’s one of the skills it gave me. I suppose it’s quite useful when you’re made into the editor of an international magazine.”

That hardly surprised me, since I had acquired a very good domain of Spanish because of my transformation.

Madam Giraud is a very gracious host. She insisted on me to call her Emmanuelle, and she really made me feel at home, which was quite a feat, since my entire actual home would probably fit on her entrance hall.

Emmanuelle was always posed, and she had no rush for the interview to begin: she told me we could take as long as it needed to take. She introduced me to her husband and she offered me a glass of her. If I’ve developed something after the Reversion, it’s a taste for wines. I’m particularly fond of the French ones, and the Girauds’ was among the very best I’ve savored.

We started with a little bit of small talk about wines, which was as revealing as the actual interview, but she wasn’t trying to stall me. When we actually got to it, she didn’t back out at all.
Posted by The Planet of the AP at 10:59 PM

Email ThisBlogThis!Share to TwitterShare to FacebookShare to Pinterest
Labels: The Reversion