I recently made a few questions to our most recent Reader's Entries poll winner, Ageiss. I did the same with our previous winner, but he prefered to decline, as there was nobody else posting this kind of stuff. I understand his decission.

Ageiss has left us some answers to the questions, and I thought I could post them here while we wait for an new entry. She promises she has another thing baking for this month.

Also, keep checking the blog in the next couple of days, because something very exciting is coming, this time from myself. It's a very special post, not a regular one, and I believe you won't regret coming here to see it.

Meanwhile, here's Ageiss "interview". You can discuss her answers (and maybe give your own) in the comments section. 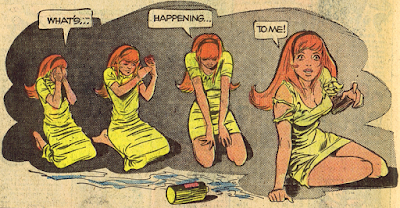 How did you discover that you liked Age Transformations?

As a young girl I would always fantasize I would grow suddently and be among my friends as an adult, and they would look up to me. I never lost the fascination for the subject.

What would you say is what makes you enjoy Age TFs?

I guess it's the reversal in power. Age can grant power in a relationship, from mother to daughter or between sisters, or whatever. And it's kind of interesting when the weak one is suddenly powerful.

That means my favorite Age TFs are from little girl (because they're the most helpless) to young woman (who have the most overall power). From time to time a rejuvenation also fits the bill.

Male APs aren't generally as appealing, but I also enjoy having one of them or so also becoming suddenly powerful. But I'm all for girl power!

What are your all-time favorite pieces of Age TF fiction?

Hard one. As far as art goes, I enjoy most of what Bela04 does. Not many do this kind of thing on a regular basis, but I can also think of Emily Grows Up, those animated APs TheTGArtist has done and probably others that escape me right now. Eerie Cuties and that sort have a few interesting things too from time to time.

As for stories, I've recently discovered tservo96, and his great process swaps. As for classics, I like those with a group of characters transforming and completely aware of it. Worth mentioning are A Girls' Night Out, Age Game, The Rock From The Stars and School Daze. Actually, there are too many to mention.

What are your favorite depictions of Age TF in media?

This will be easier if I break it down.

As for movies, there's an obvious lack of material. The most interesting thing I can think of is Species when the young alien becomes an adult woman. But that's her normal growth, not to mention her mind is kind of lost. Then there's Wish Upon a Star, which is really a bodyswap, but the closest thing to a sister's age swap movie we have.

Television has a bit more. Probably the best, if infantile, is Phil of the Future, when the teen girl becomes a beautiful woman. Great choice of actress and the way the thing plays out is interesting.

There's a True Blood episode where four little girls transform into young women at bed, and during one wonderful scene, it almost seems like a story from these kind of website. Then the AP is mostly forgotten, but you have to thank them for trying.

The TV equivalent of Species is the original V series, where the kid Elizabeth matures rapidly into a young adult. It's actually better than Species, because the girl isn't a monster, and she has to strugle a bit to adjust to her transformation. As a bonus, I'll mention a dream scene in Full House, where you see the adult versions of the girls. Not a real AP, but the great casting convinces you they actually grew up.

As for kids' shows, there's Jumanji, which is actually the closest thing they've done to a great AP story on a cartoon.

I also recently discovered an episode of a cartoon named Bibi where a little with progresses herself into a very curvy adult. I still haven't found a version in a language I understand, but in some,dubbings, they actually use an adult voice actress for her transformed self instead of keeping the child's voice (the same thing happens in some Jumanji dubbings)

Comics are probably the one medium where this happens more frequently, and it never got better than with It's a Gas. It's so short and simple I can't explain the appeal, but I can read it a lot and still be fascinated by Jenny's aging.

I've just seen a few pages of Sokora Refugees, where a plain schoolgirl transforms into a curvy elf from time to time. I would like to see more from it.

There's a French comic called Angor, where two young boys and a girl use an amulet to transform into adult warriors. It's well done, but they don't show the initial transformations, and there's no much reaction on their part. Pity.

Not AP, but a greaat beautification is in Grimm Fairy Tales' Ugly Duckling, where a nerdy high schooler drinks a potion and becomes a supermodel.

As for mainstream comics, I enjoy Lori Morning's AP arc. Sins of Youth had a superb premise, but they wasted it. There's something good from time to time with Dial H too. Flash has one where his kids get older, which isn't great, but at least interesting.

And unfortunately, I don't like manga/anime aesthetics. A pity, since they do APs all the time! Anyway, I believe Creamy Lemon has one of the best processes in any medium. Sadly, I've never seen the complete thing. There are others I enjoy sometimes, but I hardly rememeber the titles.

What are your favorite stories from this blog?

Just checked and these are among the ones I remember the most: It's a Gas, as an adaptation of one of my favorites. Pigtails, because I discovered the blog with that one, The Night of the Strange Green Light (the original is another of my favorite stories), with its slow changes, The Reversion, for obvious reasons, Family Exchange, wich was adorable, and all three multichoice stories. Recently, I liked DC Girls, and Caterpillar might be my all time favorite suddenly.

I like F2Fs as long as they are changes for the better. No downgrading for me, as you can notice in my earlier answers. I always prefer a true transformation to a body swap, but I had fun writting this month's Great Shift entry.

Not really interested in TG, but I guess I'm as curious as anyone would be. tservo's stories had made me wonder how it would be to be a big male for a while, while they become women. But just curiosity, not a fantasy.

How would your perfect Age TF scenario be?

It would involve more than one chracter transforming, ideally most of them in young adult APs. I like when they know what is about to happen a while before it does, because I like their anticipation. I know I would be excited in their place!

Then, I like a long and detailed process, plasent for the subject but very intense. And no memory wipes, which I believe erase the purpose of the transformation. Mental changes can be good, but I like it when they mostly remember who they were before.

Also, I'm interested in aftermath. What implications and lifestyle changes must the character endure now that they're physically different? So I don't like it when they cut when the transformation is over. I like an exploration of what happens next.