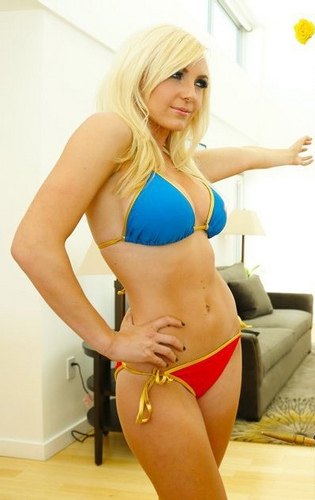 This was Adria’s seventh day in the mortal realm and even now she was still being surprised and delighted by this modern world. And yet, she felt an emptiness inside her she couldn’t explain. She was definitely not unsatisfied with her appearance. She had put on this bikini just so she could enjoy looking at herself today. And yet the idea of going to the beach didn’t seem to appeal much to her. All the swimming and clubbing she’s been doing was starting to lose their sparkle. Perhaps she just needed a break from it all, just a quiet day by herself. 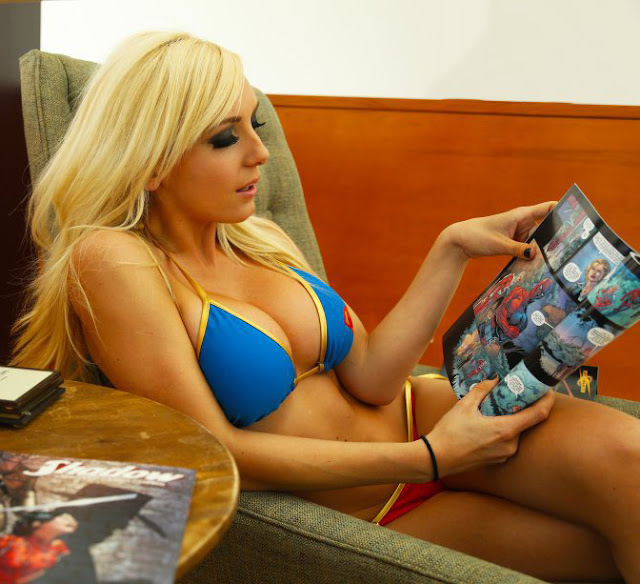 And yet even as Adria read on her couch, her emptiness still gnawed at her. What was it that was making her feel so unhappy? Was it because she had no true paramour? She admitted she had been seeking men just for nightly pleasure, but she was certain she could eventually find one who loved her for more than her body and she wasn’t feeling rushed to do so? Was it because of her living arrangements? That shouldn’t be a problem considering what a fine house it was. Maybe it was because she knew she had to pay for her lifestyle. But the knowledge she had been given informed her that she did have a job that was able to cover her finances and let her have fun. She had simply taken a week off of work to relax for a while. Maybe it was because she felt a lack of power? No, unlike the time, she originally came from, women were in equal in rights as men. She couldn’t be treated better if she were still in Underhill.

That made Adria think for a while. Underhill was virtually timeless, but it was not monotonous. The changing of the seasons brought variable enjoyable experiences. She remembered the feasts and the plays, the music and the dancing, the wondrous sights that alternated with the seasons. There was no place like Underhill in this mortal realm, no such thing…as magic…

That was when Adria realized what she was missing. She may be a beautiful woman with a sustaining career and a luxury home, but there was a void in her life where magic used to be. Technology may have improved dramatically since her time, but it was not a substitute for the magic there. There were still many things that technology could not yet do which magic can and Adria found that she was longing to be able to do those things like an elven lady could.

She had spent so much time enjoying this realm that she nearly forgotten the reason she came her in the first place. The Calling of the Lord was still yet to be completed and Adria was finding that she wanted to get her task over with as soon as possible. What was the final task anyways? The dryad had mentioned that in order for Adria to be a lady of Underhill, she had to return there. No, that’s not quite right. She had to WANT to return there. Well, she did want to return now, but how was she to get back?

There had to be something in her house that could show how to return to Underhill. Maybe another bottle of wine had the answer. Adria went down to the basement and looked around. She was pretty sure she had a wine rack down here somewhere. Eventually, she spotted it by an old wooden door. Adria looked at the various bottles, but none of them seemed to be anything special. She sighed in disappointment before looking at the door. Has that always been there? It looked so much different from the other doors in her house. The possibility soon dawned on her and she headed to the door with slight trepidation. She might just be getting her hopes up over nothing. But as she opened the door, a thick fog started to form inside the room which only got thicker as she walked through. 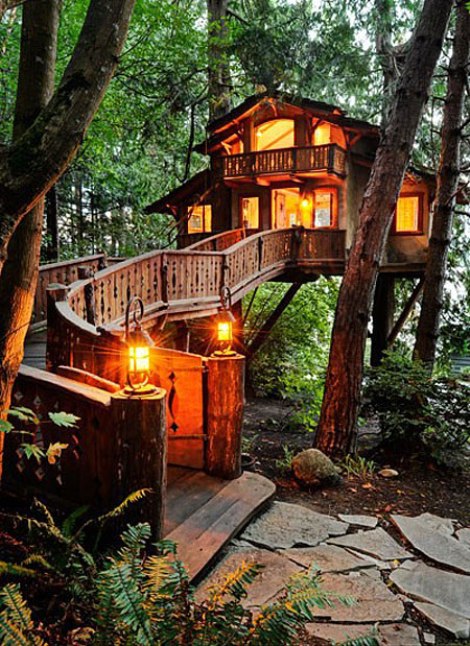 As the fog faded away from Adria’s vision, she could feel a familiar tingle in the air. She was definitely back in Underhill, though inside a room she had never seen before. She looked out a window and soon saw that she was in a treehouse that was finely built. The forest beyond was the familiar evergreen of the faerie realm.

Adria soon found a mirror in her room and looked at her reflection. She had been a bit worried that she’d lose her curvaceous body when she returned to Underhill but one look told her appearance didn’t change at all. Which made her wish she had decided to put on something more decent before she went through the door. Underhill may be an open-minded realm, but walking around in a bikini might be a little questionable. Fortunately, there was a wardrobe nearby that ought to have something in it. 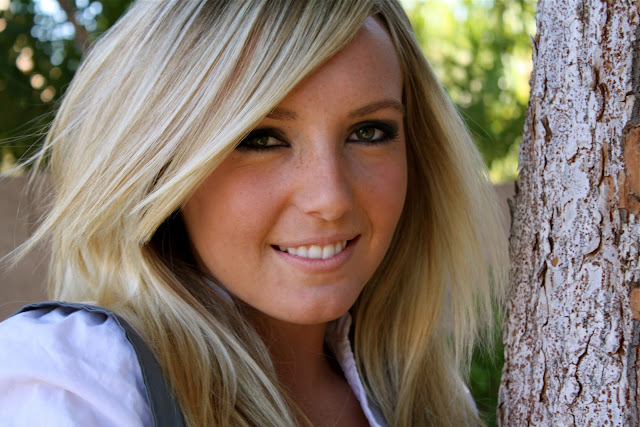 However, for some reason, there was only a white robe in that wardrobe. And it wasn’t the extravagant robes of the elven ladies, it was really more of a dressing robe. But at least that gave her some modesty. Adria could have waited in her room until whoever brought her through the portal came, but she wanted to walk outside. As nice as her house in the mortal realm was, it didn’t have enough trees around it and Adria found that she missed walking through the forest.

The forest floor was actually rather soft, covered thickly in moss that cushioned her bare feet as she strode among the ancient trees. This was the kind of world she belonged in. Even if the issue of missing magic weren’t a problem, Adria would have eventually found it too hard to live so far away from the forest. The green serenity felt more like home than anything else she ever knew.

“I had a feeling you’d be strong nobility material.” Adria jumped and turned around. She blushed heavily when she saw she was being addressed by an elven lord. “Ah, I had forgotten. It takes a while for your elven nature to reestablish itself,” said the elf lord, “Once you’ve become an elf, you’ll find that you won’t be so easy to sneak up on.”

“So, I’m going to become a lady just like that?” asked Adria, “There’s no training involved to see if I am worthy?”

“Oh, there will be training. You will need to learn to hone your new skills in combat and diplomacy,” said the elf lord, “But there is no need to test your worth. You’ve already passed your trial where others wouldn’t.”

“What would have happened if I failed?” asked Adria.

“Then you would have continued living your mortal life, eventually forgetting all about Underhill and the life you had before it,” said the elf lord, “There is a reason we keep the trial of the Calling of the Lord secret from the changelings. Too many of them still yearn for the mortal realm they left behind. If they learned that there was a way out with a potentially better life than they lived before, we would barely have any changelings left.”

“And there would be nothing you could do to bring them back?” asked Adria.

The elf lord gave a small smile and said, “Our nobility isn’t special because they’re gifted in the three fields of combat and diplomacy. All faerie can visit the mortal realms whenever they want, but they can be called back by the nobles. However, the nobles cannot call back other nobles. Therefore, being allowed to spend time in the mortal realm and still be willing to return is the greatest trial of the Calling of the Lord. Indeed, we are most grateful that you’ve managed to succeed.”

“Grateful? Why me in particular?” asked Adria.

The elf lord sighed and said, “Not everyone is aware of this, but the most common of faerie changelings to be sent to the mortal realm are the children of the lords and ladies. Our bloodlines has not been replenished with new members for too long and our children are being born weaker for it. We could marry other elves who are not ennobled, but far too often the children produced would be of their Calling. You are the first changeling who has successfully answered the Calling of the Lord in a very long time and that will make you very desirable.” The elf lord cleared his throat before saying in a somewhat bashful tone, “And unless you have already set your sights upon someone else, may I be the first in line if there are no other contenders?”

Adria felt a little shock as she heard those familiar words. Was it possible she had met this particular lord before? It wouldn’t have been hard for him to put on a glamor and she wouldn’t have known it. The face didn’t seem that familiar, but that wouldn’t have been hard to disguise. But even so, he was handsome and he was nobility so he definitely had some charm. Adria gave a small smile and said, “I will not be as easy to win here as I was in the mortal realm. I am a lady now and I will be courted as such.”

The elf lord gave her a smile and said, “Indeed you are, milady. And I will relish the challenge of winning your hand.” 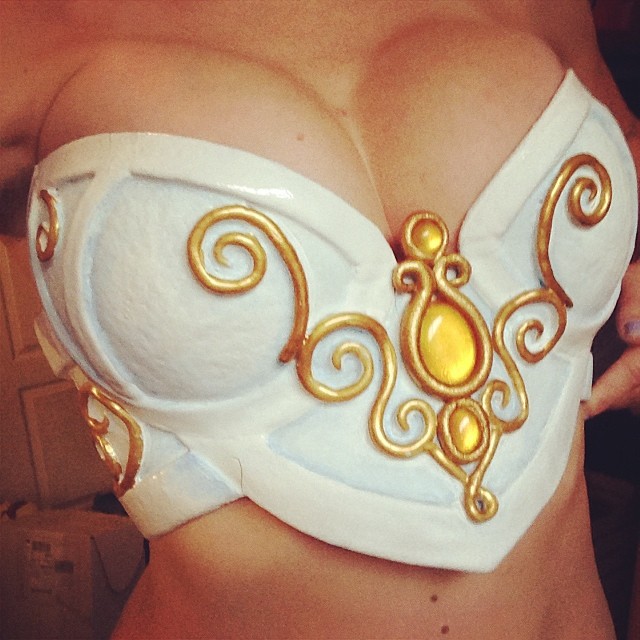 The elf lord, who introduced himself as Dinim, escorted Adria back to her treehouse. She could move into a more lavish dwelling if she chose, this treehouse having been picked because it was similar in design to her mortal house and would make her feel more at ease. Adria was content for the time to wait and adjust. Besides, it was a little premature to be thinking of moving up just yet. She was still human in form and she wanted to wait until her elfhood had full manifested before making any decisions.

Dinim had been a perfect gentleman and did not try to step into her dwelling or press for any affection. Elves were long lived and they could afford to play long waiting games. Other elf lords will be trying for Adria’s hand, some will be more oafish and impatient than others. Dinim, however, had made a good first impression though it was yet to be seen if Adria would be willing to accept him yet.

But Adria was content for the moment. Her treehouse was small by the nobles’ standards. The nobles could have mansions built in the branches of tree or inside them if they chose. But this house was enough for Adria, especially since it was starting to become more responsive to her. She had looked in the wardrobe again and had there were more clothes for her to choose from. One set that particularly caught her eye was made of several pieces of white cloth that were embroidered with gold. This set appealed to her especially because it was obviously designed to not cover much. She had put on the top to see if it would fit and it clung not uncomfortably close to her skin. The tops of her breasts were on display as well as a sizeable midriff, but Adria had spent quite a lot of time in such clothes in the mortal realm that it suited her tastes very well. She planned on wearing the rest of that outfit tomorrow, when she’ll be a full elf.