The Seven (Elemental Girl)
by Ageiss

Malin had just turned 9 when the selection started, which meant she would only become 18 once she fused with the Mineral. She had been paired with a multicolored rock, which she thought looked beautiful. 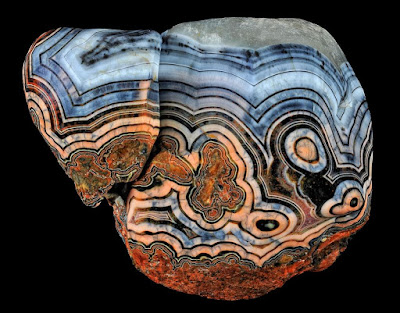 Despite her youth, Malin was a very confident young girl. She felt ready to face the challenge, and after Sylvia and Rosalina’s successful transformations, she couldn’t wait to go next. She had a secret fear, though, and it was that she didn’t love enclosed spaces. She wasn’t claustrophobic, but she did become a bit anxious as she stepped into the crystal chamber.

Luckily, the Mineral shattered much quickly than she expected, and once she was done absorbing it, she was let out of the cubicle.

She didn’t start transforming right away, so she asked if she was allowed to go out to catch a bit of air.

Once in the exterior of the Council’s headquarters, Malin’s anxiety disappeared. She felt perfectly good again. In fact, maybe a little too good.

The waves of pleasure announced the start of the physical changes. She had been wearing a black top and short pants, which suddenly started to constrict her backside.

“Come on out, she has started growing!”, said the scientist who had escorted her outside, and soon the others joined her.

Her aging went as expected, and she supported her expanding body against a tree. She could feel her facial features shifting as her legs got longer and small breasts started to push beneath her clothes. Then her jet black hair changed into intense red. 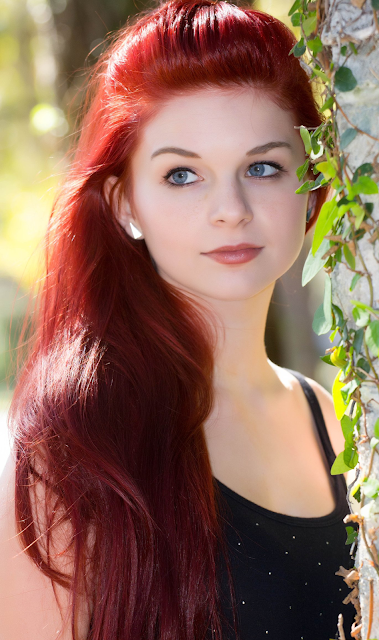 She looked to be around 16 when that happened, and suddenly her changes subdued.

“I think I’ll put on one of the larger clothes,” she suggested. Her voice didn’t sound fully mature yet, but it was creakier and coarser at the same time, just like a teenager’s.

In part because of her new hair color, she selected a reddish sundress which hung a bit loose on her, but she had a feeling her growth wasn’t quite done yet.

Still, almost two more hours passed without any outward changes, but she was sure her insides were shifting, making her something else, something… not human. She suddenly felt very warm, but comfortably so.

Then her growth resumed its previous pace, and she aged her final two years.

Malin held her dress’ hem as it rode up her thighs, as she became taller and filled out a bit more. Her face matured slightly, and her breasts and backside got very firm, if not exceedingly large.

She knew it was done and that she was 18 now, and she liked the results. She was a bit tall for her age, but very slender and fit, and when she saw her reflection, she blushed at how cute her face had become. Being a redhead also suited her quite well.

“Hey, your eyes!” said someone in front of her. 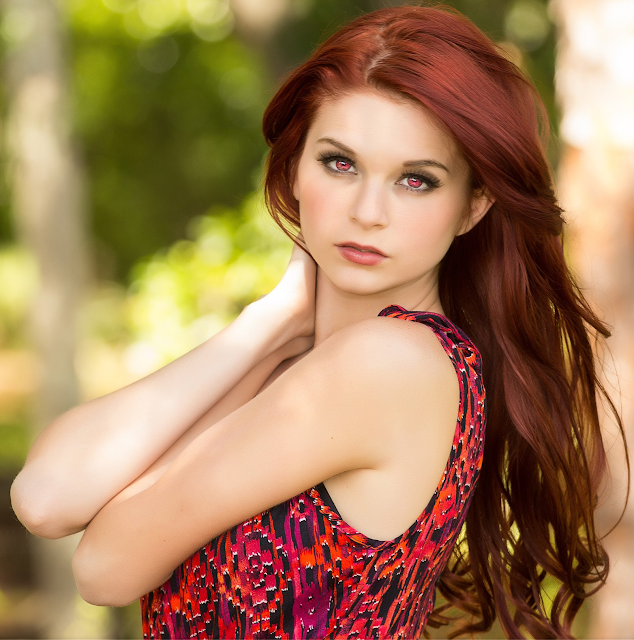 Indeed her eyes felt itchy for a couple of seconds, then they started changing until they had become reddish too. They even seemed to move, as they kept flickering.

“I dig this look,” she said, and was glad to hear her voice was still soft and young, but not squeaky any more. She was a young adult.

Suddenly, her inner warmth began to spread, building a very agreeable sensation through her body. 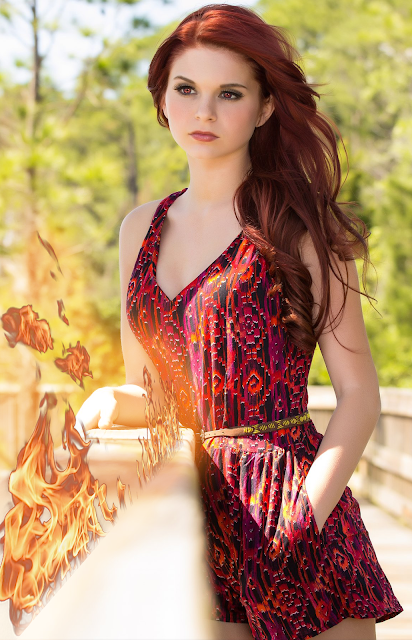 She wasn’t, actually, but a trail of flames did appear over the ledge she had been laying upon.

“I guess we know what your powers are now,” said the head scientist, and Malin was aware they all felt a bit of apprehension. They were probably afraid she would burn them accidentally.

But as soon as she was aware of her ability over fire, she suddenly discovered she had a good deal of control over it. She waved a hand and the blaze disappeared. Then she snapped her fingers and a small flame appeared in the air, which she then made float all around her. 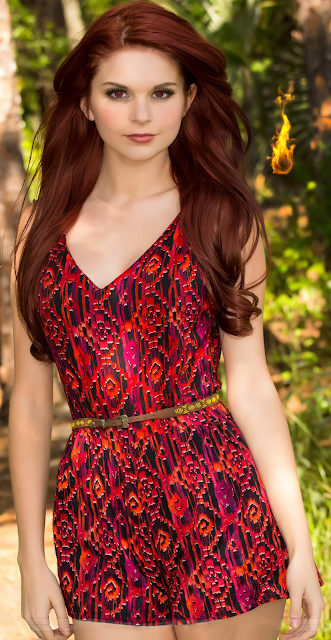 “Be careful!” said her father.

“I don’t think it can harm me anymore,” she said, and put a hand on the flying flame. Indeed, she was now fire-poof.

Malin was a very responsible girl, but she was lively and loved to have fun, so she started dancing all over the garden, fire rings shooting around. Besides, she knew she wouldn’t harm anyone as her new alien biology granted her full control. Indeed, she completed her hops without burning as much as a single blade of grass.

Despite that, the scientists were a bit fearful that she would lose control during sleep and that she would start a fire on her bedroom, but when they monitored her brain functions, they discovered that the new portion that allowed her pyro kinesis actually shut down as she slept. 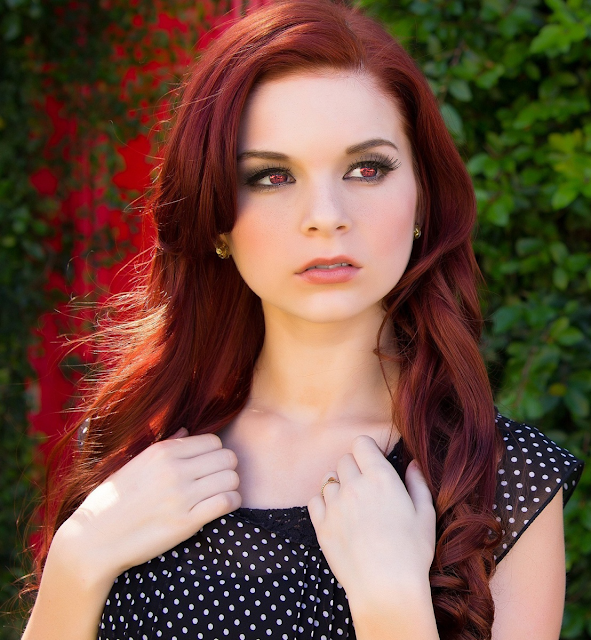 Next morning, the scientist supervised Malin as she tried out her new talents. Her control over the fire element was complete, and she could do it with her mere thoughts, though waving her hands and moving her now nimble and agile body seemed to help.

In just a few hours, she had grown to love her changes. Her physical transformation hadn’t been as flashy as her friends', but her set of powers was just as cool… or hot.

But in fact, Malin hadn’t even scratched the full extent of her abilities. It wasn’t until two days after her transformation that she discovered something radically new. She had gone to the beach with Sylvia and Rosalina, all three transformed young women trying to relax a bit after a trying time. Of course, Finland's coasts were quite cold, but Lady Specter couldn’t feel neither cold nor heat, and Amazonia’s body was also very resistant to any extreme temperature.

Malin, on her part, had her own internal warmth, but a few minutes after arriving to the beach, she felt her inner fire subduing.

“Uhm… I think something is up with your hair,” commented Sylvia. 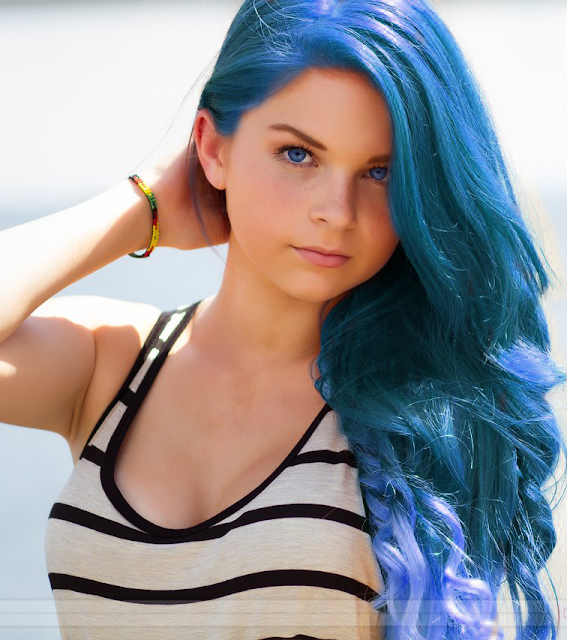 Malin wondered what was wrong, and she grabbed a few strands of her reddish hair… except it was slowly becoming blue. Her eyes were also shifting from red to blue again, except it wasn’t her natural blue. Instead, it was bright and intense.

“Is that you, Malin?” asked Rosalina pointing behind her.

Malin turned around and saw the sea was creating violent splashes, and had gone from placid to very frightening.

Indeed, as soon as she was aware of it, it was very easy to make the waters calm again.

“It seems I can control more than fire,” she realized, and she lifted an arm, making a huge wall of water rise from the sea. 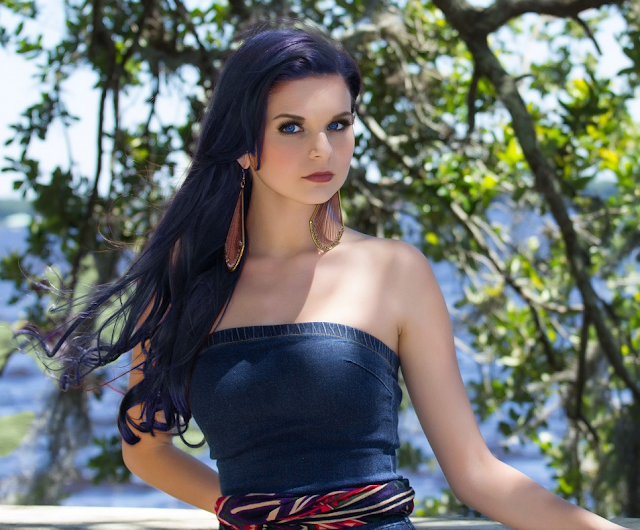 Malin spent the next few days near the coast, training.

Her control over water was as impressive as she had over fire. She could walk over the sea without sinking, surf barefoot with her own personal waves, and even swim bellow water without drowning by creating a big bubble around her head. 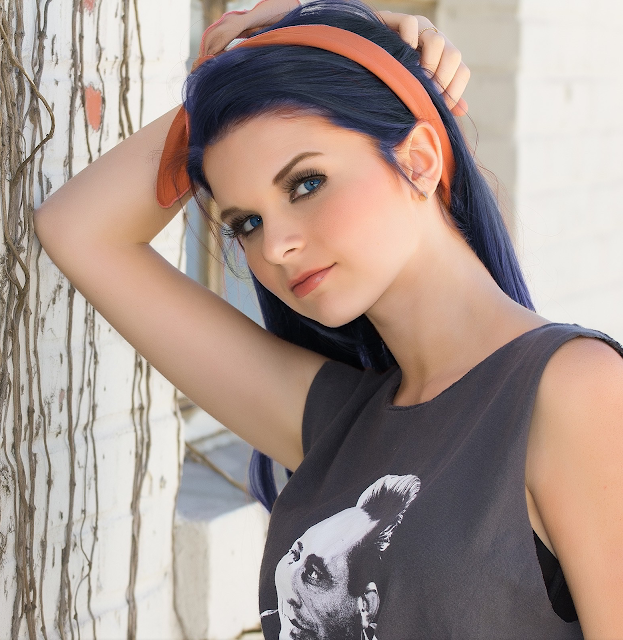 She had been able to change willfully between her fire and water personas, which prompted the transformation of her hair and eyes between red and blue, but the change took over a minute in completing itself. She felt she could bring down that time with more training, which would become very useful on the field.

Since she had discovered her water powers, she had assumed she could also learn to control the other elements, but though she tried, she was unable to do so for weeks.

Indeed, her next big step happened during her very first mission, over three months later. She had been trying to stop a train, something with which both her water and fire control were quite useless. Amazonia was on her way to lend her support, but it seemed she wouldn’t make it on time.

Just then, she felt a curious sensation. She could tell both her eyes and hair were changing into something new, this time green, and she felt a deep connection with the ground bellow her feet. She knew in that new state, she could control the earth element.

Indeed, both the soil and the metal rails obeyed her will at that instant. The train stopped and she saved the day. 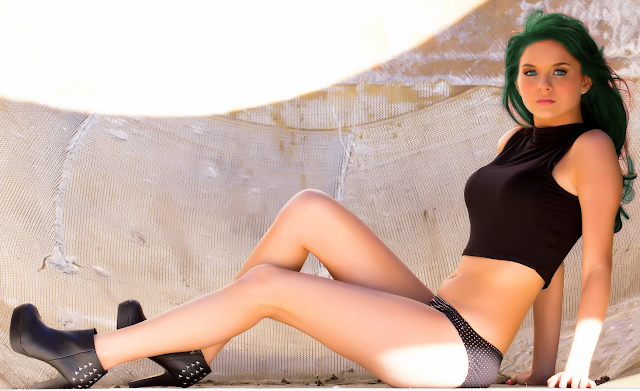 Malin fell over the now very comforting dirt, tired but very satisfied. It seemed she had been right, and her powers were beyond just fire and water. A good thing too, since she had gone ahead and selected Elemental Girl as her moniker. 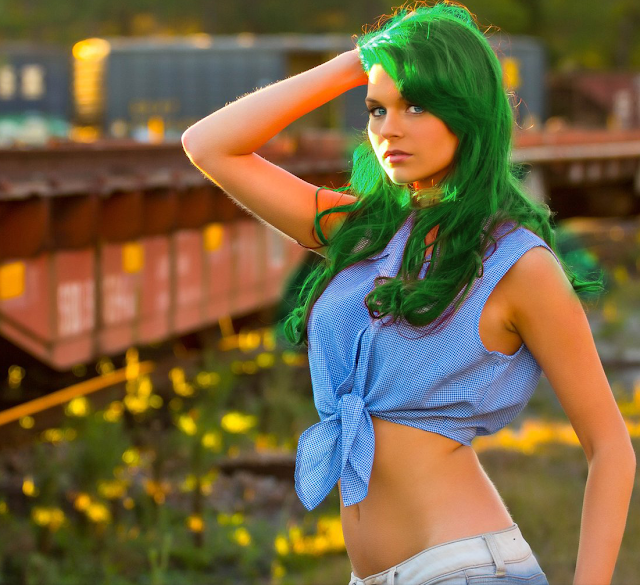 She started training near another train wreckage. Those days, she could give Amazonia a run for her money, being able to levitate tons of rock and metal with mere willpower.

She realized she had become very dangerous, being able to pulverize the side of a mountain or bend an entire locomotive into a ball of scrap.

She closed her eyes and she felt the pleasing transformation into her Fire self. She had improved her technique, and was now able to change in about 30 seconds. 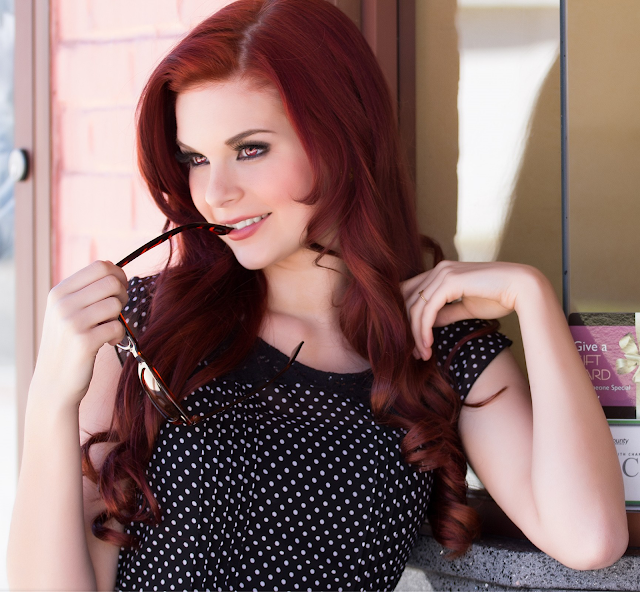 Fire had become her favorite persona, and she spent most of her time like that, not only because she loved her red locks, but also because she liked the way it made her feel.

For she had realized each element also brought a slight but perceptible change in her personality. Fire made her a bit more passionate, while Earth got her grounded and more aware. Water made her bubblier and happier, which was also a good way to feel.

Then there was air. 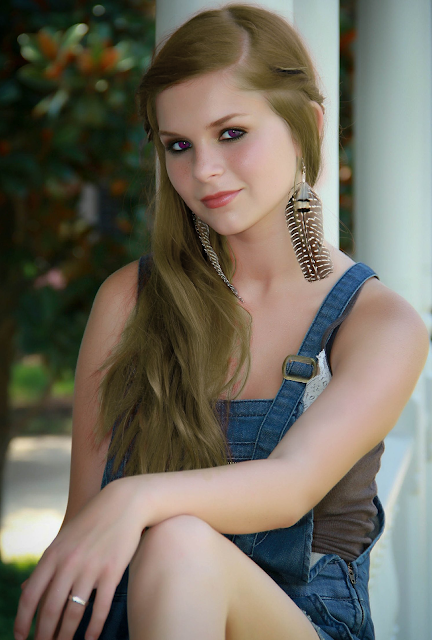 It had taken her too much practice until she was able to control the last element, which made her hair almost blonde and her eyes purple, and also gave her a carefree disposition.

But, more importantly, she could control Air, an element which was EVERYWHERE, and thus was among her most useful resources. She had even learnt to glide with the wind, though she couldn’t fly as much as Lady Specter. 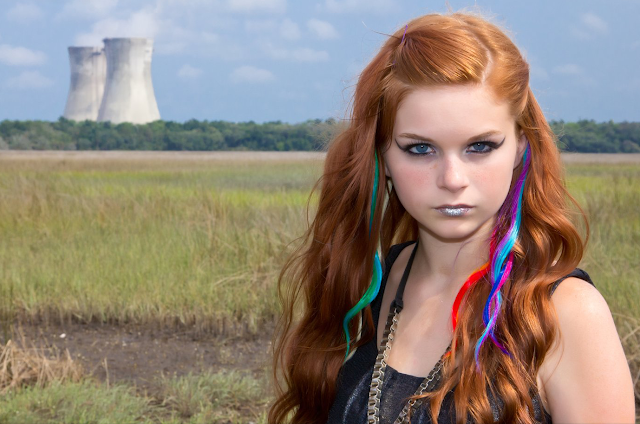 Her last and very valuable discovery had been her “multicolored” persona, a state she was able to maintain for a few minutes, and which allowed her to control all elements at once. It took her a lot of concentration to keep that form, but it had helped her many times since she had learned about it during a nuclear plant crisis. 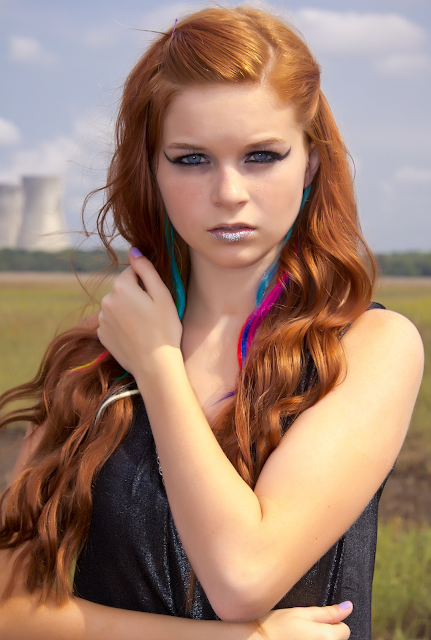 But even before she had mastered Earth, the Council’s activity with the Minerals had continued. The transformations of the other four children had gone on. And the first one had been the only boy in the group.

Hourglass
Split Woman
Posted by The Planet of the AP at 11:45 AM