The Seven (Prologue)
by Ageiss 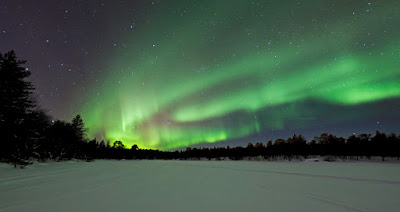 It all started with the discovery of the crash site in Lake Inari, North of Finland.

It was Christmas Night, and at first, the witness though the flashes in the sky were simply Northern Lights, the Aurora Borealis. But when the debris was found next morning, it was obvious something else had been going on.

The most common assumption was that it had been some kind of aircraft from Russian territory, but after a couple of weeks, Finnish scientists were absolutely sure of one fact: that projectile simply didn’t come from Earth.

The discovery was finally announced to the world a month later, and was at first received with fear. The most powerful countries were decided to find out more about the perceived attackers, but Finland fended them off. Then they made an even bigger announcement: they had finally decoded the alien language within the aircraft computers.

The planet as a whole sighed in relief when it was revealed that the object wasn’t a missile or any kind of weapon, but actually some kind of message in a bottle.

The Aliens greeted Earth people and lamented they wouldn't be able to ever meet them in person. Even with their amazing technology, it would take them far too long to even get close to our solar system. The subspace traveling system they had used to send the capsule would be fatal to any living organism.

But what they had been able to do was surveillance. They had been observing Earth from afar and had realized humanity was starting a path of destruction. The Aliens themselves had been on the brink of self-annihilation millennia ago, and this was a warning to change that path.

According to their surveillance, Finland was the most stable country in the planet, and it would make a great candidate to lead its fellow nations in their new trail of prosperity. Of course, there would be many obstacles: natural disasters, disease, and beyond all, the evil in the hearts of many humans, who wouldn’t stop at nothing to destroy peace.

Thus, the aliens sent help in the form of seven Minerals. Correctly exposed to those rocks’ radiation, seven worthy humans would transform into powerful beings who would be able to defend Earth if need would arise.

This was probably the most exciting part of the announcement. Who would those seven lucky Finnish be? The aliens had suggested a selection method that would prove those who were truly honest and selfless, kind and above all, incorruptible. Sadly, not everyone could stand a change of being selected.

As a side effect of the powerful radiation, the Minerals would also double the physical age of their subjects, which made most citizens ineligible. It was determined after much deliberation that only children between 9 and 13 years would be up for selection, so that their transformed forms would be in their physical prime.

An Apolitical Council was created to control the selection of the Seven “Earth Guardians” and the handling of the Minerals. Nothing would be as dangerous as giving them to a political party or government with interest of their own.

The selection took over four months. All eligible children in the country were tested. They went through psychological tests to determine how worthy and able to carry such a responsibility they were.

Then the names were announced: the Seven children who would soon become the most powerful and important people in the world. Both the selectors and the general public were quite surprised, though. Out of the seven, six of them were girls. It seemed females were truly fairer and more benevolent, or maybe it just was a monumental coincidence.

It was a testament to those children unpretentiousness that none of them were actually expecting to get selected. They suddenly turned into world celebrities, and even the most humble of kids would feel excited about the possibilities that were about to open for them. The most affected were their parents, who knew their children would soon become adults with a responsibility towards the whole planet.

There was also a certain nervousness about the procedure. The aliens had explained how to use the Minerals, but even the most confident scientists were afraid something would happen. Thus, it was decided that not all children would go through the changes at the same time. Instead, they would do it one by one, the order being left purely to chance.

Thought they didn’t know what effects each Mineral had on a human, they had already determined than each of them would be different. Thus, the pairing of each subject with a Mineral would also be left to chance.

The random selection sorted a 11-years-old girl named Sylvia to go first. She was randomly paired with a white, almost translucent mineral. Whatever properties it contained, they would define the rest of her life.

Hourglass
Split Woman
Posted by The Planet of the AP at 6:14 AM