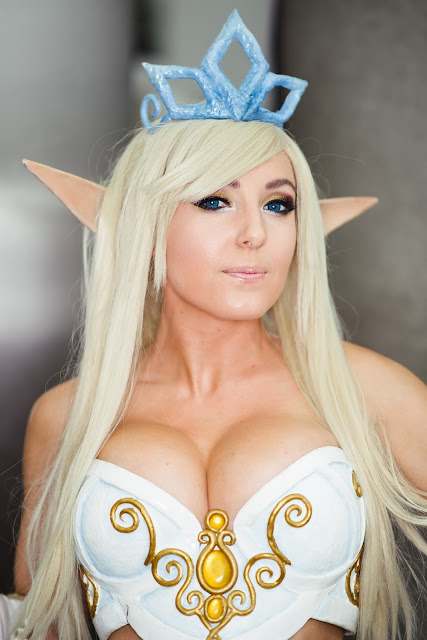 The next morning, Adria woke up to feel a heightened awareness throughout her whole body. She reached hands up and felt her ears. They were pointed again, far more pointed than before. She went to the mirror and look at herself. Her hair seemed to be a paler gold than before and her ears were quite long and pointed. But elf ears come in a variety of shapes and sizes and hers looked no more outlandish than any other’s. More importantly, it showed that she was finally an elf woman like she had dreamed of.

Adria went to her wardrobe and put on the top she had tried last night and the other garments that went with it. As she expected, her clothes covered not too much and it was tight across her chest and pelvis, leaving nothing to imagination. There were also a tiara that she had found that she decided to put on. She wasn’t actual royalty, but small decorations like this were pretty common among the nobles. 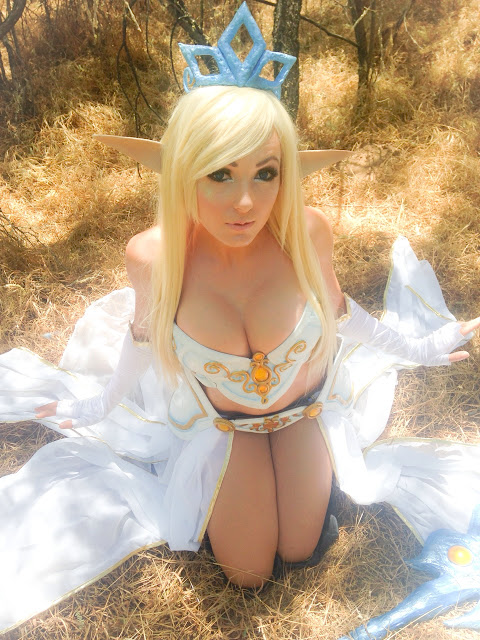 Adria went outside and took a deep breath. Her sense felt more alive now that she was an elf. She could the magic tingling within her and she wanted to try out her new abilities. And she knew just where to start. She wasn’t sure how much time had passed here, but she wanted to see if Shanna had finished her Calling by now. Unless Shanna had gone to the mortal realm, it should be easy for Adria to find her here. But first she’ll need to see a dwarf about acquiring something. 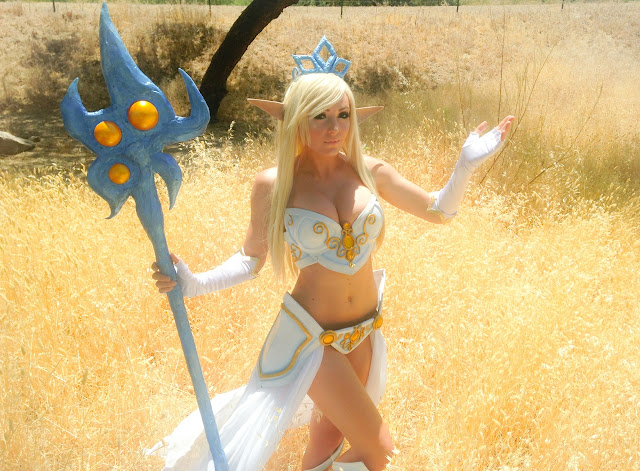 As a lady, Adria did not require a staff to work magic, but it helped her to focus it. She liked the unique pattern of its head which somehow complimented her tiara. Adria had knowledge of a few basic spells, like a locater spell that would lead to whomever she was seeking in this realm. Shanna must in a place that Adria hadn’t been before as the option to teleport there wasn’t an option, not that Adria had the skill to teleport yet. But she did not loathe the lengthy walk. It allowed her to see parts of Underhill she hadn’t seen before. She had no idea that there were grasslands like this and the long grass gently tickled her bare skin instead of making it itch like it would in the mortal realm. 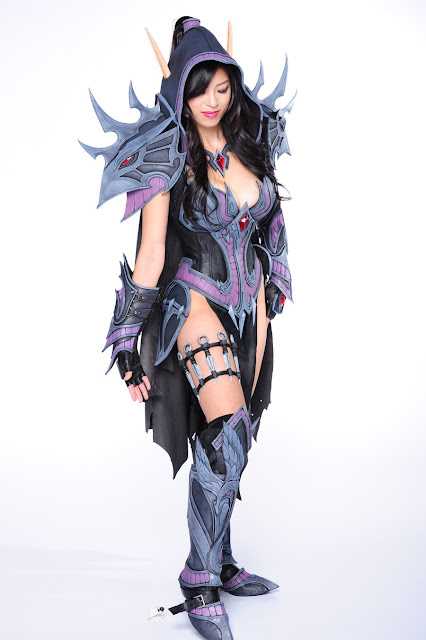 Eventually, Adria came to a small tower which the locater spell was pointing firmly to. She went up to the door and knocked upon it. After a minute, the door opened and an elf woman greeted her. Her dark hair and her eyes were the only things recognizable. “Shanna?” asked Adria.

The elf woman gave a confused look before asking, “Adria? Can it actually be you?”

“Indeed, I’ve finished my Calling yesterday and it looks like you’ve already finished yours,” said Adria.

Shanna blushed and said, “Well, it turned out that I had a talent for magic. I’m not fully trained yet, but I have a lot of promise. But you’re nobility now. How did you passed your trial?”

“Let me in and I’ll tell you all about it,” said Adria.

“Of course, come in,” said Shanna as the two elven women walked inside. 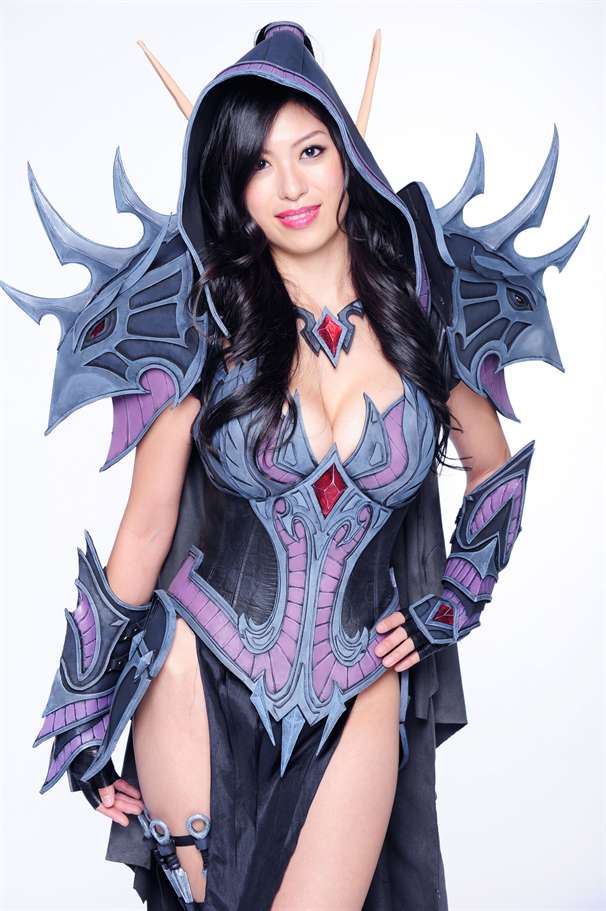 Shanna’s tower was a bit on the utilitarian side. Evidently she was like Adria; recent come into her power and had yet to choose whether to upgrade her home or move to a different one. Adria was glad she had a friend who was on the same level as her. It’ll give them something to bond over as they eventually moved up.

Once the two of them got settled, Adria told Shanna all about her Calling from defeating the kelpie to going to the mortal realm. She had adjust her vocabulary as Shanna had no idea how much the mortal realm had changed since her time but Adria did go into a lot of detail.

“I guess that does explain why the changelings aren’t told everything about the Calling of the Lord,” said Shanna, “I’ve known a lot of changelings who wanted to go back home and they would have taken that route out.”

“Would you have done it?” asked Adria.

“I’m not sure,” said Shanna, “I’ve thought of going back, it’d be easier if I went back to my own time. But I’m really sure. Besides, I’m much better at magic than I am at using a sword or bow. I was lucky I was able to get enough magical power for when I faced my Unseelie opponent.”

“So what did you fight? A troll, ogre, manticore?” asked Adria.

“Actually, it was an imp,” said Shanna.

“An imp?” asked Adria with some confusion. Demons didn’t truly count as fae so they were rarely seen or welcomed in Underhill. But any demon, even a small imp, that had managed to stay here for a long time without being thrown out or slain would be able to grow more powerful by feeding on the excess magic of the realm.

“Well, it wasn’t just an imp. This imp managed to become the leader of a small gang of goblins. They were really more like a group of bandits than a major threat, but I put a stop to them before they could get any more serious,” said Shanna.

“You beat them all by yourself? That’s pretty impressive,” said Adria, “How did you do it?”

“A few ice spells. Imps hate the cold, especially since they usually live in a much hotter region. One good blast and the imp poofed. The goblins were a challenge afterwards but I froze them stiff,” said Shanna, “After that, I was escorted to where I could do my magical training. Compared to the imp and goblins, passing my biggest trial was a snap.” 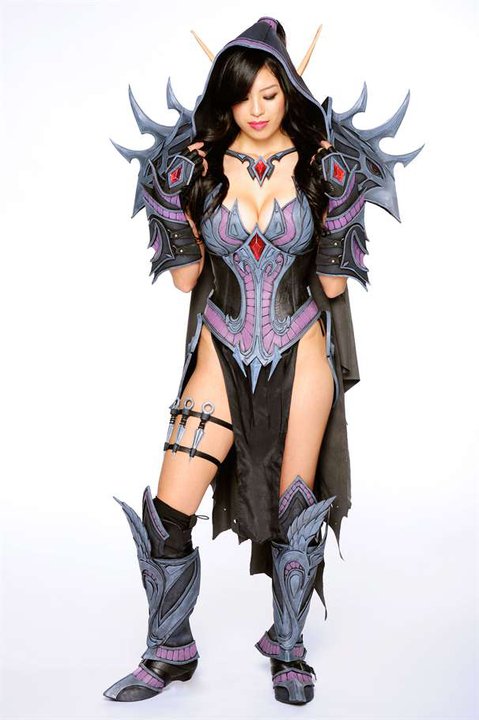 “Well, you’ve definitely gotten a sexy body out of it,” said Adria. Shanna’s outfit was more modest than Adria’s, only really showing off her cleavage and her upper legs. But there was no doubt that her body was probably as curvy as Adria’s and her face was quite beautiful and exotic.

Shanna blushed heavily and said, “I’m still getting used to this body. I’m not used to be so tall and, well, curvy.”

“I bet you haven’t been around too many men,” said Adria. Shanna’s face went completely pink at that. “I thought as much. Shanna, you’re a woman now. There’s no need for you to be here in this tower. We should be exploring, seeing more of this realm.”

“But I haven’t completed my training yet,” said Shanna.

“I said exploring, not adventuring. We’ll keep out of trouble. We’re just going to enjoy our new selves. Don’t tell me you haven’t wondered what it was like to do all the things the adult elves do,” said Adria.

“Well, I am curious,” said Shanna.

“There you go, let’s go have some fun,” said Adria. 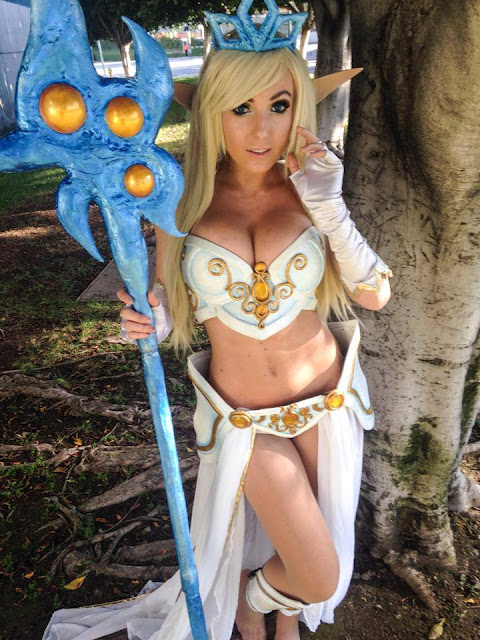 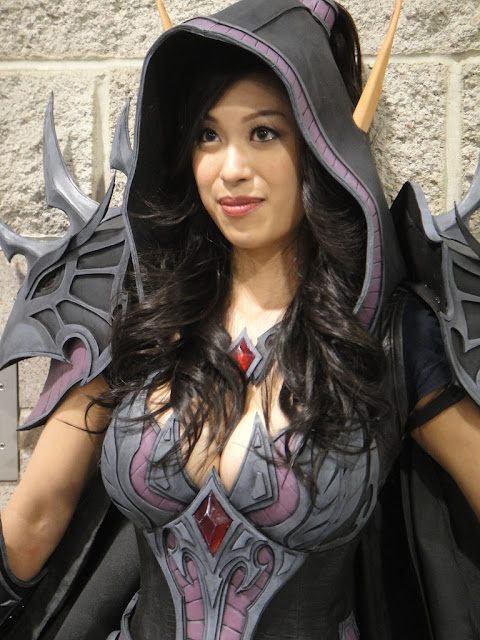 The two elven women some time exploring one of Underhill’s cities. Dwarves had a large hand in constructing the city so it was more made of stone than it was of wood. This was a cosmopolitan area where the various races of the Seelie could live in. Elves may prefer the beauty of nature, but they were capable of adapting to urban areas, especially ones that used to be human.

“Things are easier to look at when you’re not only four feet tall,” said Adria. A group of nearby dwarves gave her an annoyed look at that. “Sorry, I was a changeling until very recently. I didn’t mean to offend you.” The dwarves shrugged at that before going on their way.

“Living in this city would be exciting than living in a lone tower in the middle of nowhere,” said Shanna.

“Besides, not so many men would be coming to your tower,” said Adria, causing Shanna to blush even more, “We need to work on making your more comfortable around guys.”

“Maybe later. I want to be able to enjoy the benefits of my Calling first,” said Shanna.

“And you know what one of the benefits are?” asked Adria, “Be able to journey to the mortal realm. It’s not a bad place to visit.”

“Already? But you just got back,” said Shanna.

“I don’t mean a long vacation and I don’t mean right now. Maybe once we’re better with our new abilities, we’ll take a trip up there. There’s so much to do here right now.”