Since you've been good with the comments this week (except for today), I'm leaving you this longer story here. If you keep the great work, I might keep doing these daily updates next week too!

Here's something I've been wanting to write for years.

“It’s a new game. Looks neat,” said Odette opening the box and setting the board.

She and her five friends were into fantasy role games. They were often called nerds at their middle school because of that, but actually they were all very different from each other. And while Mia was indeed as much of a stereotypically nerdy as possible, Dawn was the most popular girl on her class, and a junior cheerleader.

The only thing they had in common was their affinity for these kinds of games, but they had soon become good friends. They’d joined Odette’s initiative to create an all-girls club for role players. She had become the de facto leader at these meetings, even though she was a quiet girl in the classroom, who went pretty much unnoticed there.

“Looks more like a regular board game than actual roleplaying,” observed Alexandra. The board represented a detailed map, featuring some kind of rich fantasy world with many interesting locations. Coincidentally, there were six wooden pieces to play. Each girl chose their own and placed them on each of the six starting points, which were all in different places of the map.

“The box doesn’t say much,” said Millie reading it. “The goal is to reach Castle Ivory, which is at the center of the board. It says the rest of the instructions will become self-evident as we play.”

The heaviest of the girls, Charlene, shrugged and took the dice. She had won last week’s game, and they had the tradition that the latest winner would start the next game.

The two dice rolled. A five and a one. She advanced six squares and landed in an area full of trees.

“Velusian Forest,” she read, and next thing she knew, she felt as if she was inside a whirlwind of darkness.

She could smell the moist dirt and vegetation before regaining her other senses. Once sight came back too, Charlene looked around and gasped at the tall trees of a forest at night. Even more surprising than being teleported to another location, was the fact that she was dressed in nothing but what looked like a skimpy bikini made from chainmail.

She blushed, mortified. The 12-years-old girl was chubby and unathletic (in fact, she was the worst at gym in her class), and she hated the idea of being as exposed as she now was.

Then it happened. Her body started to shake and transform. She grew taller at the same time that she got slimmer. Fat melted completely while muscle tensed. Bones expanded as her face aged almost a decade. She became tall, passing the 6 foot mark, and though her blond hair didn’t lengthen, it became fluffier and wilder. Feminine curves appeared, but they remained subtle.

“What the…?” her voice was rougher, and could it be that she was speaking a different language too? In any case, she didn’t have much time to consider it, because the trees parted violently, revealing a gigantic creature with grey skin and a horrible face: a troll.

Charlene gasped and ran as fast as she could, which was considerably fast thanks to her long and strong limbs. Yet, the troll was also quite quick, so she instinctively decided to take the chase above the ground level. She climbed the trees with surprising ease. Even more shocking was the fact that she wasn’t out of breath. Actually, she didn’t even feel weary yet.

Just then, she realized for the first time that she had been carrying a longbow on her back and a quiver with arrows on her hips. The troll was gaining on her, but Charlene was far enough to turn on her bare feet and aim her weapon. She took a crystal that was hanging on her belt and she touched in to the arrow’s tip, which immediately burst into flames. 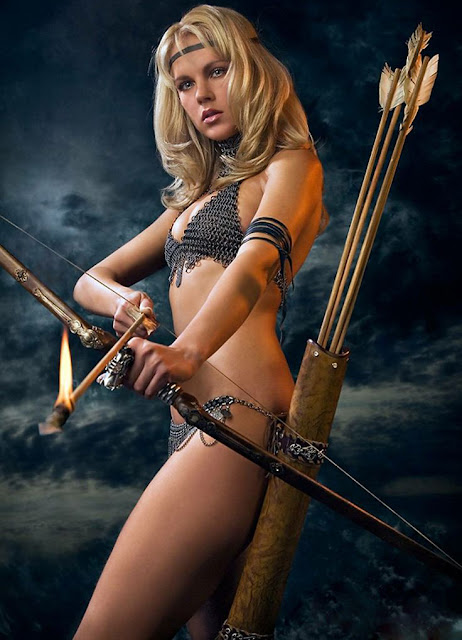 The troll was almost upon her. She wasn’t sure if this would work, but she took her shot. Amazingly, it landed exactly at the center of the monster’s forehead. It looked at her stupidly and then it fell on its face, quite dead.

“Chieftain Charlene! Are you safe?” asked someone behind her, and a man dropped from a tree. He was tall like her and very robust, and he was wearing nothing but loincloths. He talked in a coarse kind of language, but she understood it perfectly.

“Let’s go back to our brother and sisters. Darkness is upon us and more trolls could appear.”

She knew she had to follow him. Charlene walked silently behind him, thinking about all that had just happened. She had been transformed into an adult woman –a very agile and lean one. Not to mention she had been transported inside the game’s universe, and she was now hiking barefoot in the Velusian Forest, after taking the life of a twelve feet tall troll.

They arrived to a settlement of men and women like her and her new companion. Their tents were on the branches of the very wide trees, and none of them were wearing much for clothes.

She was able to discover which one of the shelters belonged to her and she spent the night there. Her belongings were scarce. A few furs for the coldest months and a variety of weapons: broadswords, bows and axes as big as her former self’s whole body had been.

There was also a tiny box of scraps, where she found a piece of mirror. She examined her new face. She looked like herself except older, thinner and, she suspected, prettier that she would otherwise be. She also marveled at the developed body under her neck, from the small but pert breasts to the toned waist and well-built legs.

“What kind of role game is this?” she wondered as her womanly hands probed everything. She didn’t go to sleep until late, and when she did, she found she was surprisingly comfortable on the tree branches.

As the days passed, and she learned the lore of the game, she understood she was now a Forest Dweller, nomadic warriors who lived among the trees on these regions. Their Amazonian women weren’t only tall, but also as strong as the men, who were in turn the strongest among all human tribes. Charlene had also turned into one of their most skilled fighters, so she was one of the chieftains.

Those talents would certainly come in handy in her plans, for she had realized what she had to do. She would need to go to Castle Ivory to finish the game and return home. That seemed much easier when she had to move a piece on a board with the dice, but now she had to physically get to the center of this vast land. There would certainly be dangers, and she had learned that Barbarian People such as herself weren’t warmly received in the capital, but she would attempt the long journey anyway.

Her fellow nomads were sad to see one of their finest warriors go, but they respected her decision. She would have to go on her own, though, with nothing more than a few arrows and her best battle axe.

She hoped the game wouldn’t actually kill her, but she would go through lots of discomforts in any case. The length of the voyage alone would be enough to discourage her former pudgy self, but with her new physique, the idea actually thrilled her.