I'm sorry about the delay for this part, but as you see, it ended up being a bit long. I hope you're still enjoying this project.


Alexandra’s piece turned into a human-looking figurine, and then it started to grow. From its original two inches, it expanded into a Barbie doll-sized statue, much larger than any other piece on the board.

“What do you think that means?” wondered Odette.

Unlike the others, she actually seemed eager to be absorbed by the game. Mia was obsessed with fantasy worlds, and she was enthusiastic about this chance to escape into one for real. She was a self-confessed nerd, and she looked the part very much: her skin was pale and pimply, and her unattractive face was further aggravated by the thick glasses and braces. Her body wasn’t much help either, and the less that was said about her fashion sense, the better. Not that she cared much about her looks, or at least so she said.

“See you on the other side, I hope,” she said, looking at Odette and throwing the dice. She got a one and a six.

Mia looked in confusion at the board. Her piece had started in one of the Tartten Islands, but if she moved it seven spaces, it would end up directly in the Sapphire Sea.

She just shrugged and placed it on the right spot, then she welcomed the dizzy feeling of being transported into the game.

A saline smell… That rocking movement... She realized she was indeed in the middle of the ocean, floating over a very small wooden plank.
“Oh, no! I don’t know how to swim!” Mia yelled in panic. She didn’t even much care about the fact that she was half-naked. She just needed to get out of the water, but she couldn’t see the shore.

She was unprepared for her transformation when it started. Her 12-years-old body contorted over the board as it matured into early adulthood. She wasn’t just aging, though, but also getting more attractive every passing second. Her short, stringy and mousy hair grew down to her waist and it became golden and wavy. Her glasses slipped and fell to the water, her vision now perfect as her eyes shone in a new blue color, then she spat her braces as her teeth straightened.

Her face’s beautification left her almost unrecognizable, as she now had model-like looks with only a trace of her old self. Her body was improving similarly, and she was getting slender and graceful. She had adult curves now, but they weren’t exaggerated. She instead had the trim figure of a fashion model.

It had all been so captivating, she almost forgot for a second that she was floating in the sea. She was fascinated by her changes, but then she realized that becoming older also meant she was now a bit heavier… and the plank couldn’t hold much longer. She was sinking.

She franticly moved her long shapely legs but it was to no avail. She couldn’t float. Then she saw a wooden ship breaking the mist around her and she seized her opportunity.

She grabbed the fishing net that was half-submerged in the water and hoped someone would hear her and hoist it up.

Something else was happening. Mia felt a strange sensation on her throat and her legs went numb. She assumed she was transforming yet again.

She was on the brink of passing out. Then the net started to rise and she opened her eyes when she fell on the deck of the ship, alongside a great number of captured fish.

“Thank you so much for…” she muttered weakly, and then she fell silent as she saw the skull on the flag waving over her head. The men closing around her were dangerous-looking and armed to the teeth. Pirates.

Mia looked down and understood why her legs felt so weird. She didn’t have them anymore. Instead, she possessed only one long limb, finished by a big fin and covered in pink and purple scales. 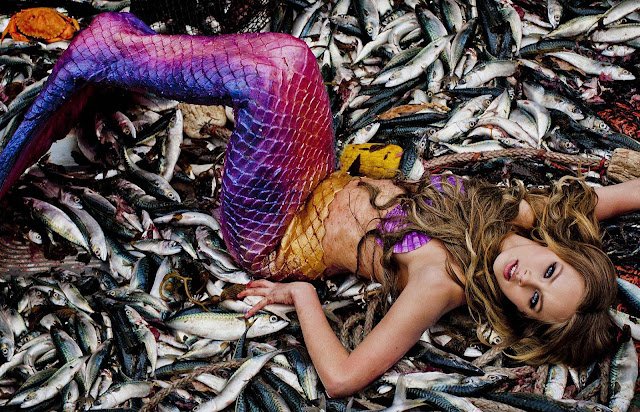 “What the heck? I’m really a mermaid!” she yelled.

“Did you just notice that, dearie?” a seaman mocked her and his chums laughed.

One of them didn’t, though. He hit her head with a paddle and almost knocked her out. 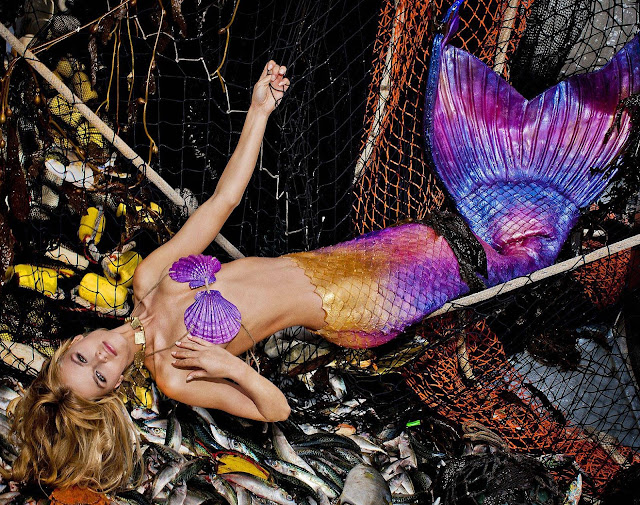 “Don’t let her speak. She can be dangerous. What do we do with her?”

“I say we sell her. They would pay us quite a lot at Vagrant’s Bay.”

“I don’t know if she will last that long,” said another one. “But she’s one of the purty ones. I say we enjoy this bitch until she dies out.”

The men hooted in agreement and Mia knew she was doomed. But then something came over her, an instinct. Her iridescent tail changed into gold and aquamarine. It seemed that her new appendage could reflect her moods.

She held herself up with her hands and looked at her aggressors with wrath. Then she started to sing. 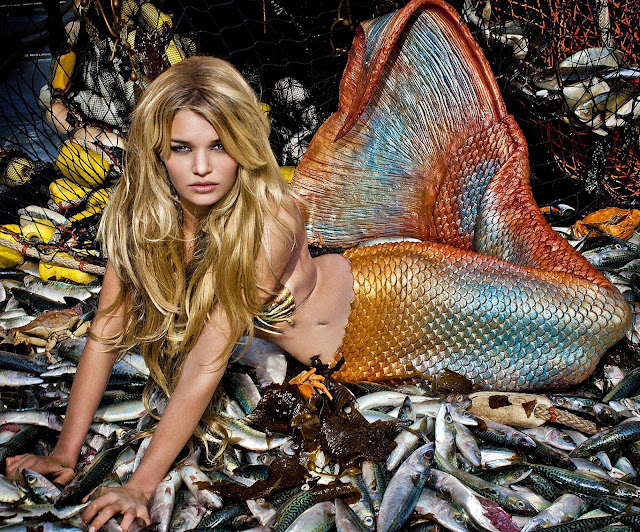 Mia had once been tone-deaf, but now her voice was the loveliest, more seductive sound she’d ever heard. Her chant was almost instinctive, and it was in a different language. She realized this was the same dialect the pirates had been using, and that her calls for help had also been uttered using it.

The men had become entranced. They looked at her in fascination, and her attacker even let go of his oar. She knew they couldn’t move while she sang, and that her teeth could pierce their flesh. She was sure the customary thing for a mermaid to do in this situation would be to eat all these men (and she felt the hunger for it), but she opted to escape instead.

She wasn’t sure that this would work, but Mia flung herself into the water. As soon as she took a deep breath within it, she realized she was a true mermaid. It felt great, much better than air. Whatever respiratory organ had replaced her once human lungs was working perfectly.

She could also see very well underwater, and her mobility was amazing. She whirled around for a while just because she could, and also to test her new fin.

Mia could see a few lights on the distant depths, and she suspected it was a settlement of merpeople. She swam quickly in that direction.

The siren’s city was beautiful. The buildings were made of coral, shells and nacre, and they glistened softly in the dark waters. The great palace in the middle was dome-shaped, and as she approached it, another mermaid advanced in her direction. She had to be a guard, since she was carrying a long spear and a shield.

“Your mother wants to see you,” she said.

It turned out that Mia’s mother within the game was the Siren Empress, which made her, her only daughter, a princess. She gushed at the fact silently.

Since their race didn’t age like humans, the Empress was still a very beautiful mermaid, who in fact looked a lot like Mia now did, except that she was wearing a flowing cape that floated behind her as she sat in the pearly throne.

Memories of Ariel, The Little Mermaid, came immediately to Mia’s head. Was she about to get scolded by an overbearing parent? Luckily, her new mother only expressed her relief at Mia’s safety and praised her on her clean escape from her kidnappers.

After that, Mia retired to her private chambers. Even for a mythological princess, her new room was exceedingly large and sumptuous. Mermaids didn’t own much in the matter of clothes, but what she could wear, she had on her wardrobe. Jewelry also abounded.

The whole ceiling was a mirror, and she swam upwards in order to see herself. With all the tension of her capture by pirates, she hadn’t properly examined her transformed self yet.

Mia fell in love with what she saw. Her long dark blonde hair swirled in the water around her face, which was sexy and bold now. Her body was remarkable too, at least the human half, and her torso was shapely and athletic. Her pert breasts were tightly encased within large shells, and her arms were supple.

The enormous tail was an odd addition, but she thought it looked colorful and elegant. It was fitting for such a gorgeous and exotic creature as she was.

She kissed her reflected fleshy lips in appreciation. She had never ever experienced an ounce of self-admiration before, and now her own looks had awakened some kind of narcissism. It was partly because her vanity had been repressed when she had been a nerdy human, and she secretly craved for good looks. But it was also because of her new inherent disposition: sirens were as conceited as fairies were.

Mia enjoyed every minute of it. She had gone from rejected geek girl to arguably the most popular woman in the Underwater Empire. She was a literal princess, and she had beauty, riches and even servants at her command.

This was causing a profound change in her personality. She was now a bit stuck-up and egoistical, and though she realized what was happening, she welcomed the alterations. It was long overdue: for once, she was the one who mattered.

It wasn’t surprising then, that out of the six players, Mia was the last one to decide she had to find Castle Ivory for the sake of her friends. Unlike fairies, mermaids weren’t very altruistic despite their vanity. They were actually a bit egotistic by nature.

Four full months passed before she finally came around to what she had to do. Even if it meant leaving this perfect life for that of a nerdy tween, this was her duty.

Convincing the Empress was the hardest part, but she finally agreed to let her daughter visit the capital if she took three of her best guards to keep her safe.

Mermaids didn’t fare well on land. They could survive out of the water for periods, but they needed to get completely wet for at least three hours a day. There was also the matter of not having legs. In short, travelling on land wasn’t the best of options.

Luckily, there were enough rivers and other interconnected bodies of water that would allow them passage to the Castle Ivory. Some of them were dangerous, of course, particularly the underground passages where krakens and other monsters roamed, but Mia was confident that her guards would take good care of their princess. As they should.