Yeah, I had to make the picture on this part from scratch. Enjoy.

The other five girls were speechless. After rolling her dice, their friend Charlene had been absorbed into her game piece, leaving only her empty chair behind.

Charlene’s plain wooden piece was twisting and changing into a small sculpture of a scantily clad woman with a bow and arrow at the ready.

“Did you see that?” asked Mia. “First it got Charlene and now her piece changed! This game is actually magical! Where did you get it?”

“I just bought it at the flea market,” said Odette. “Looked fun and in good condition, and it was very cheap, so I thought I’d bring it here!”

Dawn tried to take Charlene’s piece from the board, but it was stuck on its place.

“How will we get her out? We can’t just leave her stranded there,” she said.

Alexandra was checking the box. “A very absorbing game,” she read out loud. “No kidding! And listen to this. No matter how intense things get, you have to keep playing. Only by reaching Castle Ivory the game will end.”

“That wasn’t there when I saw the box!” protested Millie indignantly.

“So I guess those words just appeared there, uh?” asked Alexandra ironically.

“We just saw magic twice! It’s so hard to believe a few words could have appeared on the box?”

“Whatever,” said Odette. “You know what this means. We’ve got to keep playing if we want to get Charlene out.”

Nobody fancied the idea a lot.

“But…” Millie said, biting her lips. “Then we’ll also disappear into the game.”

“Yeah, I guess so. I’m not sure where we’ll go after that happens, but wherever we wind up, we should try to get to Castle Ivory,” concluded Odette.

Everyone looked at Dawn. She had been sitting at Charlene’s left, so it was her turn.

She gulped, knowing that she had to do it, but feeling very scared.

“Just please… close the door and don’t let anyone in, especially my sister,” said Dawn. They had gathered in her house that day and they were playing in her room. She rolled the dice.

A four and a six. Ten spaces. She took her simple wooden piece and moved into a spot covered in flowers and foliage: The Skygardens.

Well, at least that sounded better than The Dark Bog that was nearby, she thought, and she felt her whole self thrusting into a void.

It was over quickly. She suddenly was standing on her feet in the middle of a very pleasant and musty-looking woodland area.

Dawn felt an odd sensation on her scalp and she touched it. Her beautiful golden hair had been pulled up into an ornate style held by a hairband made of natural purple flowers. Her clothes had also changed. She was wearing a beautiful lavender dress with a completely bare back.

She liked the attire, though it was a couple of sizes too small for her. After all, the young cheerleader wasn’t only the prettiest girl in the club, but also the oldest and tallest. She was only a few days from turning 13, and she had always been somewhat tall for her age. She had also recently started to develop soft teenage curves, and she was very proud of the small breasts she had sported for the last few months.

Dawn was thinking about her tight dress when she started shrinking. It wasn’t a subtle reduction, either. In just about 10 seconds, she had become only 3 inches tall! She realized she was now standing over a thin bush twig, but her weight didn’t even pull it down.

She had thought her changes were over, but then she began to get physically older. The dress revealed slender legs which were becoming shapelier. Her hips expanded, as did her breasts, which pushed out much farther, revealing cleavage. If she had been her normal size, she thought she would have been at least a D-cup, but surely that wasn’t the right label for someone so small.

Dawn’s already pretty face matured into that of a gorgeous woman, while her eyebrows reshaped, giving her a mischievous look. She had become a tiny adult woman, but then she transformed yet again, as her ears stretched and became pointy, while her back sprouted large insect wings. Her whole self then started to glow with a faint purple light. 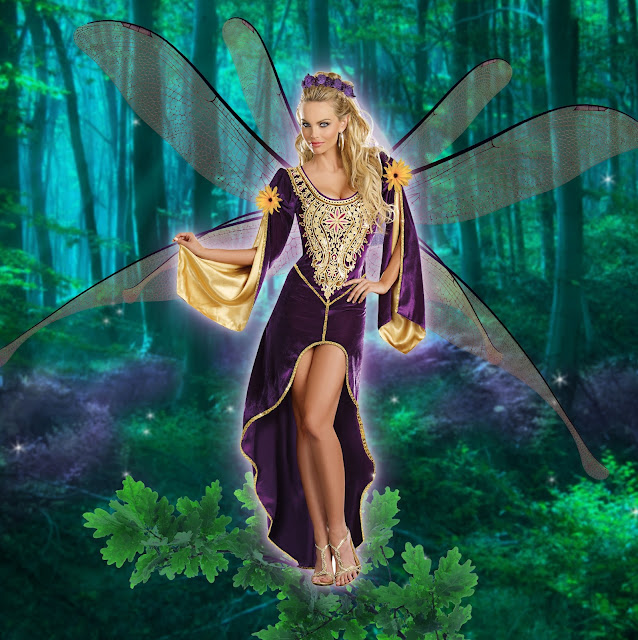 “Did I just turn into a pixie?” she wondered out loud. Her voice was extremely high and her language sounded like giggling gibberish, but it made sense to her.

Actually, she was a fairy, which was a completely different race, though pixies had a similar size.

Just when she was thinking how much she loved her new looks (fairies are rather vain, and Dawn had already been a little so even before becoming one), she noticed a large shadow dawning upon her.

She looked up in time to see a crow flying right towards her. Of course, a crow was now much bigger than she was, and she immediately realized they probably enjoyed eating fairies.

Dawn wondered if her wings could move, and they did so at will. She immediately hovered over the branch, and she shot away from there, flying at a furious speed and producing a gentle buzzing sound.

The crow was fast, but nowhere as much as her. She soon left it behind, and she instead turned her attention to the fact that she was freaking flying. It was so exhilarating and enjoyable that she started giggling despite the danger she had just been in. Fairies are also fun-loving people.

There were tiny fairy villages all around the Skygardens, and it didn’t take Dawn long to find her own. Everyone received her as if they had always known her, which was rather disconcerting.

All fairies were minuscule and beautiful young women such as Dawn, though each of their wings had unique shapes. Dawn thought hers were the prettiest, but so did every other fairy. They also glowed in over a dozen different colors, and their buildings were made of foliage, though beautifully and sturdily.

Unlike the Barbarians’, fairy houses were filled with personal belongings, particularly flowery outfits and dressing table products. Dawn thought she could lead a fun and happy life there, even when being a fairy was somewhat dangerous. Predators abounded and hunters sometimes kidnapped them. It was forbidden by law, but they did it anyway since fairy dust was very valuable, as it glowed eternally and could make other objects fly.

Luckily, fairies weren’t caught too often. They were maddening fast and their dust could be used to put enemies into a trance, an ability that Dawn learned as soon as she could.

Still, as days passed, she realized she couldn’t stay a fairy forever. She had to get to Castle Ivory so that she and her friends could get back home. Even though she was having a great time, she had no way to know if one of her friends had been turned into a dragon, or something hideous. She had to make the journey.

Her new friends were horrified. After all, the voyage to the capital was a long one (and with her current size, even a root was long), but she had become an adept flyer, and she was sure it would make up for the length. What was really worrying was getting out to the open road where predators and other evils lurked.

But it was a risk Dawn would need to take for the sake of her friends. After all, as conceited as fairies could be, they were also kind-hearted and altruistic.