One would think finding a proper picture for this character would be easier. Instead, I had to do it myself again. It's sloppy but you get the sense of it.

Only half of the players still remained in the real world. The three of them watched as Millie’s piece transformed into a figurine that resembled a horse.

The girl quivered. She was very nervous. Her best friend had just been absorbed by a board game, and now it was her turn to confront the same fate.

“You can do it,” said Mia gently, patting her hand.

The other girls were usually very protective of Alexandra, for she was the youngest member of the club. She was only 10, and the only reason she had been in the same class as Millie was because she had skipped a year. To boot, she had always been too small for her age, and she was a full head shorter than most of the other girls. That all contributed to the fact that the other five always treated her like a little sister.

But despite that, she had never been quite as gutless as Millie. She nodded and took a swing of the dice. One and two.

She barely moved away from the northern area where she had started. The spot where she landed was called “The Steel Mountains.”

She braced herself as she was absorbed.

Alexandra ended up at a valley of some kind. There were tall hills around her, and a few old ruins that looked like they had been great castles once, but which had been destroyed for centuries.
Her clothes were huge one her. She was wearing a green and purple regal gown that was obviously designed for an adult. She also had a golden crown over her head.

“Maybe I’m a princess in the game,” she thought excitedly. “Oh!”

Alexandra’s journey to adulthood had just begun. She was quickly filling out, and she figured what was happening immediately: since she had been wearing woman’s clothes, she deduced she was now turning into one. She was eager to see the results, and she wanted to show them to her friends as soon as possible. Maybe they wouldn’t treat her like a baby now.

Indeed, when it stopped, she was much older. She was a beautiful woman of about 28, her face elegant and fetching, while her curly blonde hair had shortened from waist length to the middle of her back. She was willowy and curvy too, particularly in the chest department, but she wasn’t particularly tall. Even as an adult, Alexandra was a short woman. The dress was still a bit loose.

Her feet pinched as they started to get much larger than the high-heeled shoes she was wearing. Her matured hands were also expanding before her eyes, as did her already big breasts. Then the rest of her body started to do the same. In just a minute, her large dress started to get agonizingly tight. Thankfully, her clothes (crown and all) then started to grow alongside her.

It wasn’t painful anymore, but this transformation was difficult to endure nevertheless. Tears on her eyes, Alexandra sat on the grass, bearing the steady stretching of her whole self.

She kept enlarging for over half an hour. When it was over, Alexandra pushed herself up, feeling an incredible amount of vertigo as she looked down. She had become taller than the hills around her… and even the castle ruins over it. 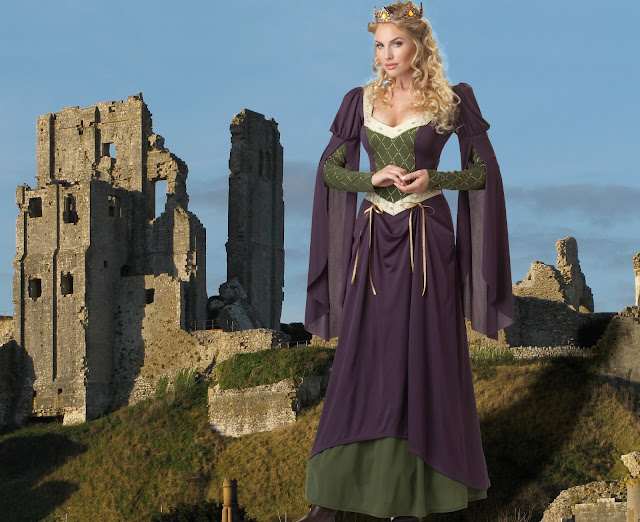 Alexandra thought she was about as big as the 12 story building where she lived with her parents. To be precise, she was now a 124 feet tall woman.

“I’m a giantess,” she said, unable to absorb how surreal that was. Even though she had spoken very lowly, her voice boomed all around. Birds took flight from a distant forest.

Never in her wildest dreams could she have thought she could be this huge. It was frightening, yet oddly pleasing for someone who had always been so small.

She took a couple of tentative steps which made the earth tremble. She staggered around like a baby, not that surprising taking in consideration that her smallest toenail was currently bigger than her whole former self had been.

Alexandra intuitively knew that her best course of action was to find other giants so that they could explain her situation a bit. She didn’t find them until well after dark, though; when she finally reasoned that the only place where such big creatures could reside was well into the mountains. It would have been a difficult trip for any other being, but she had no trouble with steep hillsides or deep cliffs any more.

And there they were: many giants of various sizes. She was surprised to see how civilized and normal they looked. No monstrous heads, no grey skin, no shaggy green beards. Just enormous people.

“Your Highness,” said one of them in reverence as she arrived, and she remembered her huge crown after having forgotten about it for a while.

Size granted status on the giants’ society. There were lowly ones, no more than 80 feet tall, but Alexandra had inherited her great height from her father (her father within the lore of the game, anyway). He had been the biggest giant of them all, and thus, their King. But he had been killed at war, leaving her, the smallest girl of her class, as “Queen Alexandra of the Giant Folk”. She almost snorted at the irony.

The history of her new race was bizarre, for they had been humans once, centuries ago. Back then, the North was controlled by two warring families, the gentle Mirells on the hills and the vulgar Fenneri on the nearby moors.

The Fenneri were envious of their rival’s prosperity, and they looked for an evil witch to help them get rid of the Mirells. She promised she would cast a spell that would overthrow that family from their palaces, and the Fenneri accepted.

And so, during the New Year’s Party, all Mirells started to transform. Every man, woman and child from the clan started to grow monstrously, destroying their vast halls, and leaving only the ruins Alexandra had seen on the hills.

Of course, the witch had also double-crossed the Fenneri, for now their enemies were much stronger. But the new giants weren’t ready for war: their bodies were so big they needed much more sustenance than they could afford in the valleys, and they had to migrate to the mountains.

Except the mountains were already inhabited by dragons in those days. A violent war broke between them, and though the giants won (the dragons were now thought to be extinct), they also sustained heavy loses.

That’s why there were only about twenty giants nowadays, and why the Fenneri still controlled the North, even though their land was now barren and not as thriving as their ancestors had wished.

It was Alexandra’s father, the King, the one who had reignited the giants’ offensive against their enemies, which she now commanded as their Queen. Despite their size, the giants were still far from victorious. During the dark times, the Fenneri had become the only men on the lands to master the control of powder, fire being the giants’ great weakness,

With the passage of a few days, Alexandra started to get a better control over her movements, though she still had to be very careful about where to step. She was slowly getting used to the fact that even the tall trees rarely came to her waist, and that she had to eat three mountain giraffes a day in order to placate her hunger.

She had planned her next actions carefully. The Steel Mountains were among the farthest lands from Castle Ivory, but it didn’t much matter since she could cover miles with just a few effortless strides.

The real problem was that numerous Fenneri settlements that were in her way. There was only one thing to do: she had to win her people’s war. 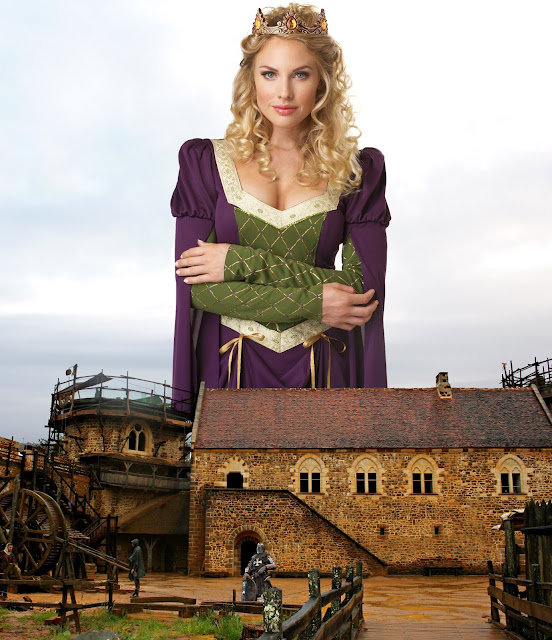 She personally raided a few castles. She just smirked with her gigantic face as the tiny people panicked and useless arrows rained upon her, not even scratching her thick skin. Powder usually came next, but by then, most of her enemies were already squashed.