Odette watched with interest as Mia’s piece reshaped into what seemed like a fish. As she had done with all of the others, she wondered about the meaning of this.

But now she was alone with the board and it was her turn to disappear. She rolled the dice one last time. Three and one.

She moved four spots and landed on the Woodland Dominion.

As she felt her whole self being absorbed into her piece, she remembered she hadn’t locked the room’s door, as Dawn had advised. She wondered what would happen if someone damaged the board while they were inside.

That was the first thing Odette thought when she opened her eyes after being sucked into the game. She was standing in a stone road in some woods. She looked down at herself. She was wearing a red and ornate outfit, comprised of a tiny top that allowed full view of her midsection and a skirt. She also had red shoulder armor and wristbands, as well as a choker. Her right hand was holding an enormous staff, taller than she was.

Odette felt faint and she leaned over the rod as she started growing. She was becoming taller than average, but not as tall as some of her friends had gotten. She stopped at 5’8’’, almost the same length as the staff. She was also starting to look too mature for a girl of 12, and she realized she was getting older.

Her body was developing but staying very lean. Adult breasts emerged but remained petite. Her waist was coming in and her legs were gaining definition. At the same time, her tan skin was becoming pale, while her black hair was becoming silver. It was also getting much longer than the cropped style she was used to have.. Her dark eyes suddenly shone in an unnaturally bright green and her vision turned perfectly crisp, her surroundings becoming much more detailed than anything she had ever seen before.

Her facial features were becoming sharper, and her ears became pointy and then started to enlarge radically, until they were about the same width as her shoulders. She realized what she was becoming, and her hearing became as sharp as her vision. Her remaining senses also became superhuman.

The red gem on her staff started to glow intensely, as if she had suddenly developed an unfathomable inner power.

“The game actually transformed me,” she said in elvish, amazed by what she had become.

Despite her changes and her high-heeled boots, she had no trouble catching her balance quite soon. It was amazing to her how stable she felt, but after all, elves had perfect equilibrium as well as senses.

Still not fully believing she had truly transformed into a legendary being, she started following the road before her. Wow. She felt great. Being an elf was surreal. The awareness and perception that came with this body were amazing.

The road twisted and turned through the woods. She walked for a while before she came upon something significant: a chalet. It belonged to two other elves, a married couple, who were currently starting a fire in front of the house. She saw them there, both beautiful and tall, with long blond hair and the same large ears she now had. When they saw her, they bowed.

“Grand Mage,” said the husband. “You honor us with your visit to our lands. Are you looking for shelter tonight?”

Odette wasn’t tired, but it was almost dark now, and she had no idea where she would stay. She didn’t know if she could trust anyone, but she thought it was a better idea to take a chance with these two. At least they were members of her new race. She greeted them back and accepted.

“You honor us,” repeated the wife. “I’ll look for another plate. We were about to start our night meal.”

It was customary among elves to prepare their food and eat on the open.

Odette sat with them and ate silently. The food was delicious, though maybe it was because of her improved tongue.

It was hard to do without revealing she didn’t know much about it, but Odette managed to talk them into explaining a lot of background story about the race and her own new identity.

Elves lived on most of the continent, but they were particularly numerous here on the Woodland Dominion, their first lands. They lived for over a thousand years and they were all wise and magical, but only one elf each generation could master the arts expertly enough to ascend to the rank of Grand Mage. Odette was such an elf, and her mission was to roam across the lands undoing mystical threats. That meant she had no place to call home, as she was an itinerant agent, but most nights she found someone who would open their doors to her with pleasure, such as this couple.

Since elves only needed to sleep for a couple of hours, and since they were powerful enough to overcome most nocturnal dangers, they kept talking outside well into the night. Odette loved her discoveries. The lore of the game was very complex and interesting.

She stared at the fire, lost in her thoughts, and then something strange happened. Her eyes shone even greener than before, and the flames also turned emerald. Odette then started to see quick flashes of images.

They were mostly visions of devastation, though from time to time she saw a woman in the midst of it. She was another elf like her, but her eyes were white and her hair was bluish. Then it was over.

“The Dark Sorceress,” she muttered lowly.

“What was that?” asked the male elf a bit alarmed, but his wife kneeled next to Odette.

“That was a premonition wasn’t it?” she said. “My father told me that Mages sometimes have them. He knew your predecessor.”

“Yes, I had a vision of the future, I think,” said Odette a bit confused.

Odette wasn’t completely sure what everything meant, but she knew something.

“A new Dark Sorceress will arise.” Of that, she had no doubt. “She’ll threaten every free land.”

“Will you be able to protect us, Grand Mage? Surely there’s something you can do.”

Odette wasn’t sure what. Unless, of course, she could finish the game. That way, she wouldn’t have to face this Dark Sorceress character. She nodded and the couple relaxed.

“Yes, I think there’s something… But I’d need to depart for Castle Ivory first thing in the morning.”

These elves’ spare room was small but comfortable. After her vision, Odette was feeling tired for the first time since her transformation, but she took a while to explore her new reflection nevertheless. 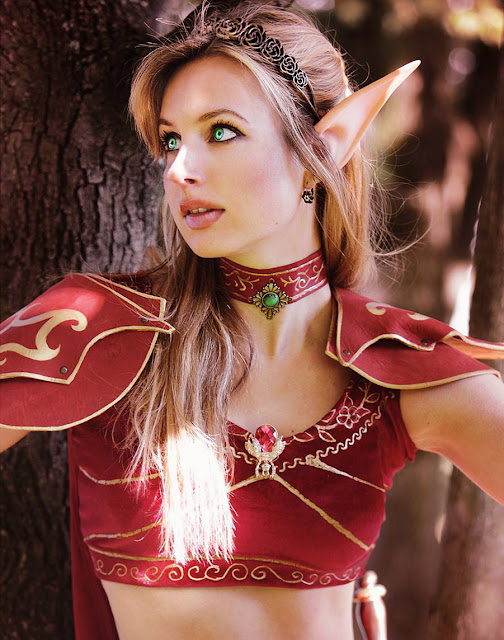 She looked mysterious and, though not exactly stunning, there was an exotic beauty to her that wasn’t quite human. She could definitely learn to live with this… at least in the looks department. She wasn’t sure about all these powers and responsibilities. Her head still spinning, she went to sleep.

Odette felt like no time at all had passed when she heard someone yelling.

Instantly quite awake and on her feet, the new elf woman kicked open the room’s window and looked outside.

The male elf was crouched in front of his door, while his mate was being dragged towards the forest by a creature that looked made from smoke.

“That’s a Shadow Wraith,” her instinctive knowledge informed her.

There was no time to lose at all, so she just jumped down the window. She landed on her feet and ran towards the monster. She had left her staff at the room, but she had a small sword on her belt, and she unsheathed it. 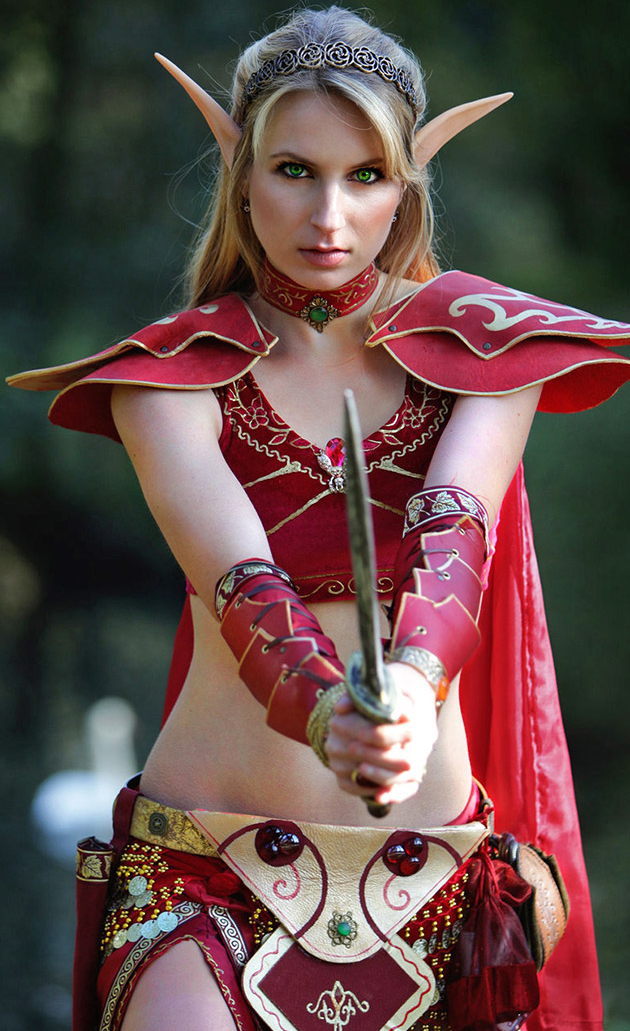 The Wraith felt her presence and dropped the innocent woman. Then it turned to face Odette with its featureless head.

“The Mage,” it said mockingly, and then it jumped over her.

Odette quickly pronounced an incantation. Her sword was surrounded by light and a luminous ball appeared over her other hand. 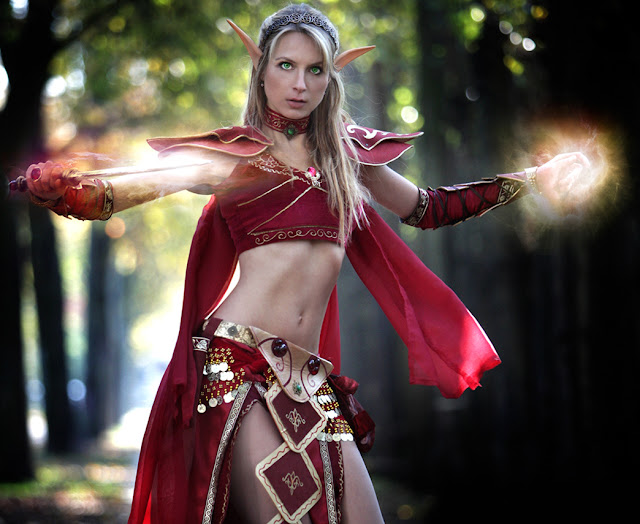 The Wraith was almost upon her, but she knocked it down with her glowing fist. Then, with a quick motion of her blade, she beheaded it. Its smoky body vanished immediately.

“Are you unharmed?” the wounded elf said behind them, and his wife ran towards him.

“The Wraith cursed you,” she said. “But it’s nothing I can’t cure if I treat you on time.” 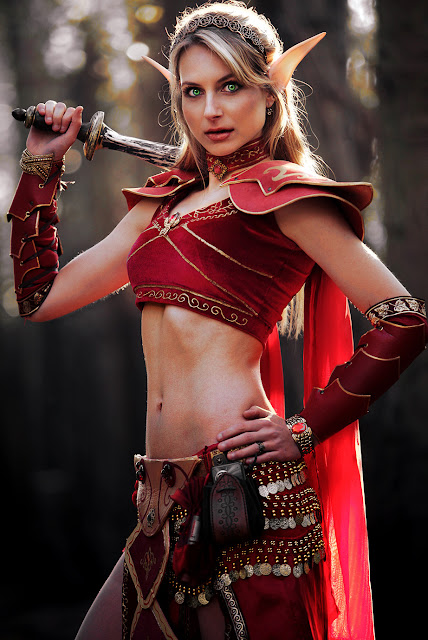 The elven girl rushed upstairs to get her magical staff. Then she chanted a spell as she passed it over the wound over the leg. The blacked flesh started to subdue.

“What did it want?,” asked the female host.

“Maybe it was looking for the source of the vision. It can’t be a coincidence it appeared right after my premonition,” reflected Odette. “Wraiths haven’t been active for centuries. This is the first one I’ve seen in about 600 years.”

She was sure of that, even though she was only 12.

“It probably sensed the coming of the Dark Sorceress and it was curious to know more. Wraiths need a new leader and that woman might be it.”

“So more Wraiths could come?”

“They will, through every land. We must alert every elf in the Dominion. Protective spells shall be cast; even the simple ones will keep them at bay for now. But if the Sorceress rises…”

Odette grabbed her staff tightly and turned around.

“I must get going. Our only hope is that I reach Castle Ivory on time.”