Gina closed the door to her room behind her. She was panting in excitement. She had finally decided to do it. In a few minutes, she would voluntarily become an adult woman!

She considered what kind of preparation would be necessary. First, there was the clothing. She could simply remove it all and transform while naked, but somewhat the idea of feeling as her clothing became increasingly tighter around her would make her transformation more tangible… give it more physicality. And that was appealing for her right now. She remembered Lauren’s adult backside snugly enclosed in her shorts and wondered how she had felt as it grew larger in the KFC’s bathroom.

Gina wondered if she could manage something like that and looked through the folded clothes that her mother had given her earlier. There weren’t short pants there, but she picked up white panties that would probably do the trick. She also put on a comfortable looking blue dress made of lace. The skirt was too long for her and pooled in the floor, while the straps kept falling down her shoulders.

She also thought carefully about the possibility of recording her change. She finally decided to do so. If anything, she could erase the video afterwards, but she suspected it would make a very entertaining viewing material. She would keep it strictly private, of course.

She turned her webcam on and sat on the edge of her bed.

“Here’s to turning 24…” she said, and drank it without further ado.

The taste wasn’t that bad, she thought, but once she swallowed it, her insides twitched immediately, fiercely but painlessly.

Gina felt the soles of her feet moving in the carpet, so she pulled her skirt up. Indeed her feet were moving, since they were becoming wider and longer. Her big toe seemed to swell as its toenail broadened, and the rest of them followed suit. Suddenly, her hands started growing in a similar fashion, so she let go of the skirt and held her fingers in front of her face.

Her concentration faltered, though, since the bones on her arms and legs started to crack loudly, enlarging her limbs and giving her a taller, gawkish figure. Then it was her spine’s turn, and she arched her back as her vertebrae elongated. Her shoulders separated sideways, broadening her back and she suddenly felt her straps tensing a bit.

Flesh suddenly started to increase too at a rapid rate. First it was on her legs. Her calves and thighs were becoming rounder, and both her arms and torso also gained some musculature. But not all her bones were done. Her pelvic area widened with two violent jerks, first towards the left and then to the right, bestowing her with gently wider hips. Her buttocks attempted to keep up by bulging too, wedging her panties a bit.

“Oh, my God!” tried to exclaim Gina, but her throat was dry and only a croaky sound escaped.

The dress' collar was so wide she was able to pull it out to see her nipples when they started to pinch. In a matter of seconds, she could see them double, then triple their size, then it hit her. It was just as the other girls had described it, both painful and pleasant at the same time, though at first it was very mild. Her chest puffed just a bit, and Gina guessed she either was still very young, or would become a very small-chested woman.

It seemed it was the first, since when she saw her own reflection, she could tell she still could be about 16 or so. Her face had shifted just a bit, giving her a more mature appearance, but nothing very radical yet. A prick inside her mouth told her that her wisdom teeth were arising there. Certainly, puberty’s full swing didn’t start until a second later.

She suddenly felt a piercing sensation in her groin, and she knew her privates were becoming fully functional. Her womb was shifting, signaling the maturation of her internal reproductive system. Immediately, an exhilarating feeling extended through all of her body.

“This is… it!” this time, her teenaged voice did emerge, though it was still hoarse.

Her skull was changing and she was aware of it, and when she turned her expanding neck towards the mirror she witnessed as the features she had known her whole life shifted positions and proportions, changing her drastically, starting to give her the look of a young woman.

Her collarbones unexpectedly popped out with one of the loudest cracks yet, and Gina looked at her chest again. Her new boobs had swelled just a little more, but suddenly they filled out, sending her into a deep ecstasy.

“They were right… this is… too good!” her voice sounded very mature to her ears, at least.

With every second, her nipples separated more and more from her chest, developing a good deal of breast tissue in between. Gina moaned as they grew, her hands hovering over them, until their ballooning seemed to slow down.

Then her height shoot up a bit one last time and it seemed her growing was finished, but as she approached her twenties, other more subtle transformations ensued. Besides her face maturing more, her overall physical condition improved, baby fat melting as muscle mass increased, noticeably on her thighs and, though she couldn't see it because of her dress, she could feel her abdomen toning significantly. Indeed, as she passed her fingers over the fabric, she could make the contours of very defined muscles there.

By now, Gina estimated her transformation was probably finished, but the frenetic feeling was only intensifying. It felt as if her adrenaline had shot to the sky as she was about to reach her climax, and she simply let herself collapse over the bed, bending the body which felt so large in every direction, as she tried to hide the low groans that escaped involuntarily from her throat.

It took her even longer than the transformation itself to calm down after that. Little by little, the excitement subdued, getting replaced by a profound satisfaction. She tried to breathe deeply, and without any haste, she sat on the bed again, getting immediately greeted by the reflection of her face. 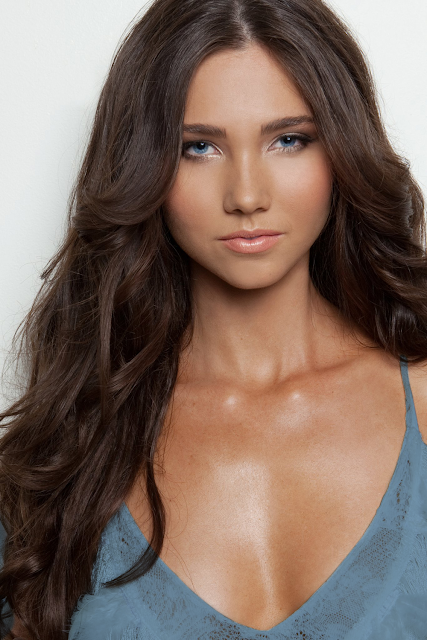 She smiled faintly. She was modest enough, but she thought she made a very good-looking woman. She was very different, but she could still see a little from herself, along with other family traits from her mother and sister that she had never perceived before. Her lips were puffier and her brow defined, and she caressed her more angular chin, slowly lowering her hands towards her neck, which had changed much more than she would have guessed, especially with her sharp clavicle.

She came down to her chest. Her breasts seemed big enough, but they looked much fuller once she held them up with her hands, creating a good deal of cleavage among them. Her nipples were also discernible through the lacework.

“I need a bra,” she thought before dropping her breasts, which fell with a wobble.

She then passed her long fingers through her hair. It didn’t seem to have become any longer, and the rest of her body seemed quite smooth too, but her nails had enlarged a few millimeters. She wanted to hear her voice again, so she spoke her previous statement aloud this time.

“I really need a bra. My breasts are quite big and I’d like some support.” She giggled. She couldn’t recognize anything from her in that voice. She thought it sounded a lot like her mom’s, and it was lower than Violet’s.

She had a feeling she was a bit taller than them too, so she got up with some vertigo. It was disorienting to be that big. She looked down and smiled again, more widely this time.

The first thing she noticed was that the skirt wasn’t down to the floor any more, but came to mid-calves. The straps were also quite tight across her back, and threatened to burst if she moved too much. The dress that had been too big was now too small for her.

Gina looked to both sides. She couldn’t believe her shoulders were so broad. They seemed quite far from her neck now.

She rose one leg. It felt heavier but much stronger. She put it down and made a couple of steps. Her body seemed difficult to control, and her paces were clumsy. Not only were her legs a lot longer, but her buttocks and thighs were much more vigorous and her chest pulled her forwards. She strolled a bit around the room to get used to the new dimensions of her frame and she slowly managed to improve her dominion over her movements.

She looked down at her feet with each step, still unused to the view that greeted her. With much care, Gina approached to the door and walked out of her room.